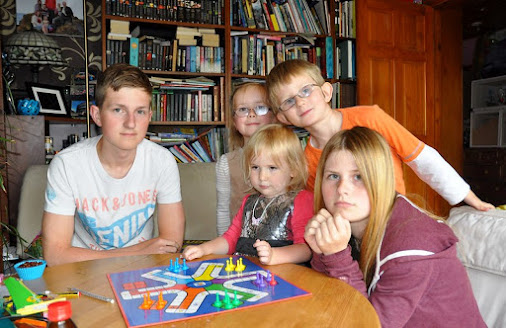 Marcel has perfect vision, as does Lots. I suspected absolutely nothing when Léon went for his pre-school check so when he failed it and was sent to the hospital I assumed some error had been made. Surely if my child couldn't see properly I would have picked up on something or had concerns? He was writing, drawing, describing fine. He could catch a ball and ride a bike. I figured they were wrong but they weren't. He was unimaginably long-sighted and I was told even at four that his vision would never grow out of glasses. The day they made him his first pair I was holding his hand as they put them on him. We walked out of the shop into the street. He turned around and gazed up and down Byres road and exclaimed 'Wooooow, is this what the world looks like?' He was four and I was already 41. I felt like the worst mother in the world. I wanted to cry. My baby was four and he'd never seen the world and I hadn't noticed. I was heart broken. Since then he hasn't looked back and he loves his glasses. I hate the reflections they give on my photos. I hate that they hide his beautiful eyes. I hate that every day they remind me how I failed him for four years but he is unconcerned.

Of course I then tested Anna up close, at a distance and everything in between from the moment she could talk. There was no sign of a problem with her so I felt no trepidation when her pre-school appointment came through. I had asked for her to be referred earlier but the hospital and optician said it was unnecessary. Of course, when she failed too, I was beside myself. At her hospital appointment it turned out her issue was in no way related to Léon's. She was not long-sighted but astigmatic. She seemed less surprised when her glasses arrived, having been able to see better so I felt less guilt. Still they have all the same issues as Léon's.

So Monday will see whether the majority of my kids have good or poor eyesight. Of course, I won't hear for a few weeks but the thought of more outpatient appointments, more trips for repairs, more bills for spares, for sunglasses, for replacements, more panics when they are misplaced, snapped or lost, more questions about the price of contacts (yes Anna has already started asking for an appointment before she goes to high school, despite only being five!) fill me with fear and loathing. I hope my baby can see ok for her sake and for mine.
Posted by Phyl at 1:27 am