As it should have been since the start 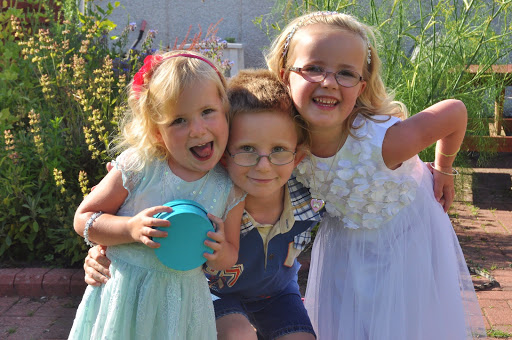 Here's Léon wedged happily between his two little sisters. After recent developments we had reached a strange situation where I partially shared a surname with four of my five children and Thomas partially shared a surname with the two smallest but poor Léon was in limbo - the only one left with the old surname despite never having lived with his father and no longer being accepted by almost every member of that side of the family. I didn't think that was a good place psychologically for my angel to spend the next four years until he went to high school where I knew they were happy for him to use my surname. I decided to put my case to Léon's school for an immediate change. We wanted him to be a full member of the family who have always been there for him.
He, himself had expressed a desire to share the double-barrelled surname of his younger siblings as he sees the Widmann part as a symbolic representation of Danish fluency. Given Léon is the best Danish speaker of the kids, he's always been peeved he doesn't have it.
I got confirmation today that his records have now been updated so he's one of us - one big happy Buchanan, Buchanan-Widmann, Widmann family looking to the future, not the past and honouring the two families who have brought these children up with unconditional love.
Posted by Phyl at 11:55 pm