And so it will remain! 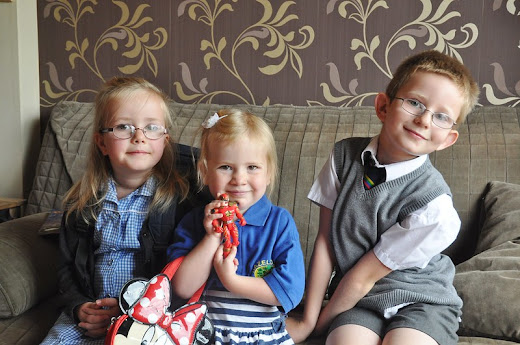 As I mentioned on Saturday, Amaia was having her pre-school sight test this week. I was all psyched up for future photos where all three had horrible reflections on their glasses, although I didn't have any concrete evidence she needed glasses, just more a feeling that what can go wrong has tended to in our family over the past few years.

The last twice we have received a letter through the post a month or so after the test so when I went into nursery this morning I wasn't expecting an envelope sitting by the register addressed to me. I only wear glasses for reading, not driving so there I was trying to get far enough away from the tiny pink slip to be able to read what it said. There were three options - pass: no further test needed till late in primary school, fail: a hospital referral will be sent out, inconclusive: the child was not able to cope with the tesst so will be referred to hospital to determine the state of her eyes. The first box was ticked! And better still it was Anna's own opthamologist who had signed it. So it was someone I know, trust and have experience of who had tested Amaia. (Not to mention she's an old school friend's sister and she lives in my street!) So for the first time since Charlotte I have managed to produce a child with eyes that work properly! It is a relief not to have to add to the outpatient appointments, to the mad rushes to the optician after school with broken glasses, to the expense of spares, sunglasses and all the rest. It is wonderful that I won't have to triple check the lighting every time I take a photo and lovely to be able to see her beautiful eyes. I hope one day the other two will be able to join her.

Interestingly, glasses have definitely become cool, rather than the target for bullying they were in my day. When I broke the news to Anna and Léon about Amaia passing the eye test, they both looked disappointed for her and Anna even took her hand in hers and comforted her with the words: It'll be ok, don't worry, not everyone gets glasses - we can get you some nice sun glasses though!
Posted by Phyl at 11:18 pm