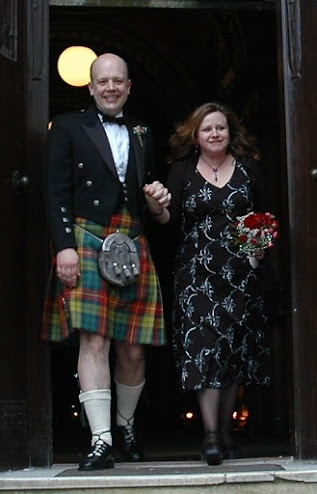 Thomas is an intellectual. He is completely unable to lie on the couch scratching his balls in front of a football match, drinking a beer or whatever it is men are meant to do... So he goes through phases... phases that are fascinating to watch from a spectator's position! We've had the heraldic phase - apparently there's some usefulness to being able to describe something as 'burely of 10 argent and azure, a lion rampant queue fourché in saltire gules armed, langued and crowned or' (whit?!) There was his fruit-tree planting extravaganza in the early days of our garden - thou shalt not plant anything that can't be eaten - or something like that. We're currently immersed in his beer-brewing (from the bottom up, not a kit) stage (so we have recipes written over the centuries by monks lying around in piles on the bed), his cider-making and wine-making stages. Ongoing also we have the Scrabble and Diplomacy battles, not to mention his voracious appetite for Scottish politics. Star Trek goes without saying, of course (including Hamlet in Klingon...) Beyond that there's history, cooking, travel and everything to do with computing and linguistics. The list is endless...

Of course, given his university linguistics background he also goes through language phases. The first I remember was lying in bed at night pregnant with Anna, listening to him muttering in Gaelic under his breath. That was, of course, accompanied by the News on BBC Alba, Gaelic kiddie TV and his discovery of Radio Alba, so having to re-tune the car radio every time I used his for the school run - ho hum. But Gaelic wasn't enough of a challenge so he moved onto his ancient Greek phase. I was spared most of it as it was more of a bus into the office thing, though my house was covered in post-its written in Greek. But then he started working from home which meant more time in bed at night and that inevitably led to Mandarin. So not only did I get muttering under the duvet every evening, but it was accompanied by a curious, rapid swishing noise which turned out to be him tracing the characters on the page of his book with one finger in order to learn how to write them. (This guy is just too clever for me by half!) But of course, there was another challenge, I could never have foreseen, but I should have guessed that once I'd put him in a kilt, even if it was only once, it was an inevitability - Scots. He's decided to learn Scots properly. It started with subtle questions to me of the type - What did your Gramps call a...? Then he spent an afternoon on Spotify listening to every (no I'm not kidding!) rendition of Burns' A Man's a man just to compare all the different pronunciations of every word. Then he found a facebook group and now there's no stopping him. He's posting on there all the time in Scots!:

Now every time I talk to him I can see he's analysing in his head how to translate what I just said into Scots. It's just as well we're living in troubled economic times, otherwise I could see a PhD thesis looming on the horizon! (And while I am sitting trying to write this he's explaining orthographic conventions from Reformation times in my right ear while reading me the church rules (not for religious purposes, for linguistic ones!) Never a dull moment!)

Of course I call these phases but they aren't finite. Everything started is ongoing, they just stack up. I'm still finding the car radio on Alba although he's not in an overtly Gaelic phase at the moment. I sometimes wonder how he manages not to exhaust himself. No wonder he has no time for armchair sport.

All these topics are also the mainstay of our dinner times - the kids must find it ever so refreshing, or just plain odd whenever they are invited to dinner with a schoolfriend!

Anyway, for all my piss-taking, it's never dull and I wouldn't have him any other way. He may have no idea who is currently in the Premier division (if that's what is is called) but he's fascinating to watch, to know and to love!
Posted by Phyl at 12:26 am