It started round about the same time as she learned to speak. 'I want earrings, I want earrings' and so it went on. I don't think I got round to thinking about earrings till I was about 11 and I didn't dare ask my parents until I was 12 or 13! But Anna knows her own mind. She cranked it up last summer but too late in the holiday to get it done. You see they need to stay in for six weeks before being taken out and at school they like kids to take them out for PE. So last week she had her sports' day and her teacher told her she didn't need to bring back a her PE kit this year, so the assault started. Every day, all weekend and so on, so I promised she could go today because Léon was going home with a friend after school.

I must have been thinking about it subconsciously because I had an amusing dream about it at the weekend. Despite having had my own ears pierced as a teenager, I started to imagine that instead of using the little stapler gun, they put a full head mask on the person and shot earrings through the little holes. It was a bit Hannibal Lecter to be honest. Anyway, in my dream, they accidentally put an adult mask on Anna and so shot two tiny ruby earrings into her neck. The alarming thing was that neither Thomas nor Anna seemed upset by it and were happily showing them off, while I was fully convinced that as soon as I pulled the ruby out of her jugular, she'd keel over and die! At that point my alarm went off and I woke up in a cold sweat!

Anyway, once I agreed I had to laugh. Suddenly Anna started describing her ideas 'I'll have a pink one in my lobe, another in the centre and a diamond at the top and a pink one in my nose' etc I realized at once she was describing what my friend Linda (here on the right, who'd been round for dinner the previous week) has. She really is pushing her luck for a five year old!

So far the two tiny pink studs seem to have pacified her for now and she's now desperate to go in to school and show her best friend Akshara as she has nice little pearl ones. 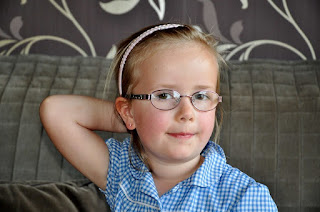