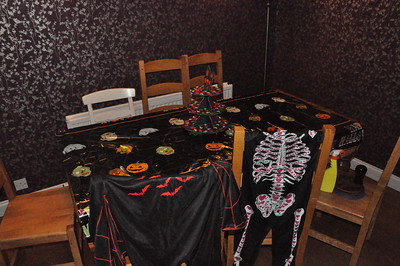 We noticed it first on Sunday. Derek and Amanda had invited the kids in for some Halloween fun. Getting into the spirit Thomas wanted some vampire teeth. Lots didn't have a costume either. We left an hour early and went into Glasgow centre. None of the shops were still selling Halloween goods. It was 28th October. After half an hour in Sauchiehall street we threw in the towel and Thomas went in just a cape (he had from last year) and Lots went in her jeans and t-shirt.

The big supermarkets, I discovered today still had things but at 10am had instated a near giveaway sale in a panic to get rid of everything. I bought these two costumes (the bat and the skeleton) for Léon and Anna at £1 each! Still - it was nine hours before kids needed them so why did Tesco think it needed to slash everything by 90%?

After school Lots wanted to go to Matalan. There, I was even more gobsmacked. As we walked in (at 4pm) the woman on the door asked 'Can I interest you in these Halloween things, we're giving them away free, we'll never sell them now?!' I looked down and came face to face with the tablecloth (pictured), the cardboard cake stand (also pictured) and several bags of chocolate pumpkin sweets (slightly obscured by the bat suit). Each had an original tag of £1. So I left Matalan with £5 of goods free of charge!

What is the big rush? I can see why everything would be heavily discounted or free tomorrow but why today? And what made the big Glasgow shops believe on October 28th, that they needed to ditch all their Halloween costumes in favour of Xmas decorations!? No one wants Xmas stuff yet, and if they do there's the Internet, but for last minute panic buyers, the Internet doesn't work.

It really is quite mad. If we don't get all our Xmas decorations in the next ten days, we'll need to watch out, the Easter eggs will be in already!
Posted by Phyl at 12:47 am