Another issue with never going to Denmark! 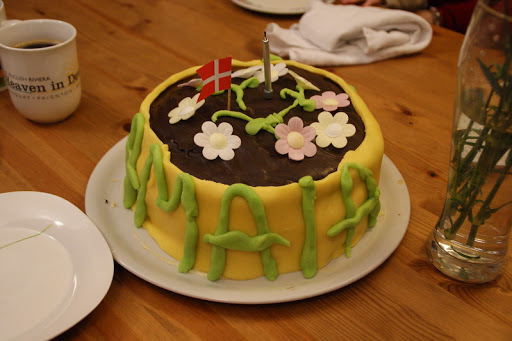 As I mentioned last month, Léon hasn't been to Denmark since he was two (because Thomas's parents usually meet us here or in their Tuscan home since they retired.) Last month I realized Léon had started to believe Danish was one of the dialects of Italy.

Today I noticed another issue. Any non-Dane who visits Denmark a lot notices their obsession with flags. They have them in their gardens, on their wrapping paper, birthday cards, and stuck to little cocktail sticks so you can stick them in cakes or whatever takes your fancy. Thomas's cousin even had dummies for his babies with flags on. The equivalent of ASDA sells 10 metre tall flag poles for your garden flag and they don't just fly them on special occasions, they have them up all year round. Therefore, anyone who spends more than ten minutes in Denmark knows the Danish flag!

Today I saw wrapping paper that was red with a big white cross on it. Oh look Léon, I said, That looks just like a flag, doesn't it? Do you remember which flag looks like that? I was 100% sure he'd instantly reply Denmark - he speaks Danish half the day after all! His reply... It's the birthday cake flag, mummy!
Posted by Phyl at 11:54 pm