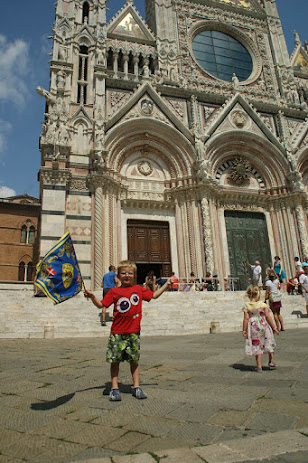 Here is Léon in the country where he believes Danish is spoken! It doesn't look very Scandinavian, does it?

Léon hasn't been in Denmark since he was two and a half. (He is now six). When Brita retired as a minister at the end of 2008, they moved out of the manse that had been their home for forty years and now split their time between their beautiful, old Tuscan house and a small flat in Aarhus. That means of course that when they are in Denmark, they do not have enough space for us to visit, so as a family we visit them in Italy. It is such a shame they left the huge manse just a few years after Thomas and I got together, as it had so much space for us all and a wonderful garden!

Anyway, the upshot is of course that Léon is now beginning to think Danish is a language that you can only speak in Italy! Thomas only speaks Danish to the three wee ones, no English, so they know it can be spoken in Scotland, but are aware, as all bilingual kids are, after a mistake or two, that they can't get away with speaking it to many other random people here! In Italy though there is a lot of Danish spoken all day every day and many of the conversations around them are in Danish. Thomas's parents even have a new Danish next door neighbour with kids in Italy!

I became aware of this anomaly when Thomas started showing the kids Nissebanden as a TV advent calendar last week. It seems to be a story of a group of Danish-speaking elves who fly off to Greenland in a hot-air balloon - truly riveting ;-) I happened to walk in as they landed in Greenland. 'Where did they set out from?' I asked, feigning interest... 'Oh, they must have come from Italy', Léon piped up immediately, 'because they were speaking Danish to each other!'

I guess when you live in a family where a minimum of five languages are spoken in the home almost on a daily basis, nothing fazes you!
Posted by Phyl at 11:38 pm