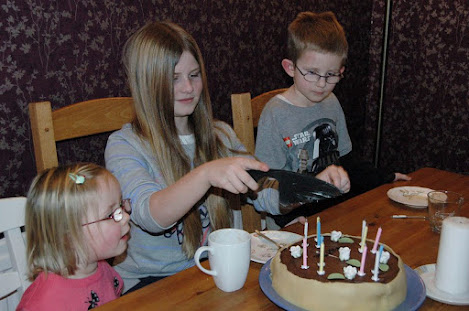 I've been thinking a lot about birthdays over the last year. As a mum of five, you have to attend more than your fair share of birthdays. I think I have now reached a quota where I am able to analyse the absurdity, on the whole, of the current UK birthday party norm.

It seems to me that from about age four up, the average middle-class 2.4 children-type, feels obliged to invite their child's entire class along to a party venue - softplay, laser party, townhall with Coco the clown and face painters, disco, golf/football party - the list is endless - seen them all (many times over), got the the T-shirt... got a whole pile of them!

How many of those parents ever stop long enough to ask themselves how much is a reasonable expense to make their child's birthday memorable? Will spending £10 a head (or more) to let each of their classmates run wild in a softplay for two hours make them happier than for example asking your child to choose two or three special friends to run around the same play area? Suddenly your bill is £200 lighter and your child feels more special, not less, because he is having a special time, rather than attending the same venue as he's attended every other second week this year with his entire class! I recently attended a venue that charges £12 a head. On arrival I found the child in question had had fifty children invited along - several classes, cousins, extended family etc At the end, as often is the case, party bags were handed out valuing, I would estimate £15 each! How can anyone believe it takes £1350 to make two hours of their child's birthday enjoyable?

Then there is the gift budget. If other parents are meant to spend at least £10 per gift (which definitely seems to be the case) then you are not only meant to set aside £250 (approx) for each of your children's birthday parties, but also £250 per child for presents for his or her classmates. I recently asked one of my kids for a suggestion as to what to buy as a present for a class party. I don't know, came the reply, I hardly know him and I've no idea what he's into! I am stunned at the stupidity of it all! I know it is pc to invite everyone, but it is mad!

I don't know about anyone else but my heart sinks when I receive the tenth invite in a month - what to buy, how to arrange my day and the rest of my kids round the drive to and from wherever. (Don't forget the petrol costs for going ten miles there, ten back home, ten there two hours later and ten back again!) I don't mean to sound ungrateful. I would be thrilled if someone chose my child as a guest, but to be ticked off as an unknown but necessary statistic irks me somewhat.

During a recession where budgets are getting tighter, I wish those who were struggling with this whole keeping-up-with-the-Jones nonsense would realize the pressure they are putting on others. I am self-employed with five kids so the whole thing is so beyond sanity, I don't even consider it, but some must be doing it despite their finances, not stopping to ask whether their child will be that much happier for it. How was the next child in the class ever meant to compete with Mr and Mrs £1350?

We have a family cake and get together on birthdays.We have special birthday breakfasts with presents and croissants and a train with candles. My kids don't seem devastated that no one has popped in to paint their face and give them a plastic bag of sweets. I'm sure they will remember their birthdays as happy occasions despite the lack of Coco. Occasionally I have a few friends round - they make a mess and a noise but they don't cost and the kid is happy! Sometimes I paint their faces (badly) and they feel happy and special.

So if I have been thinking about this for more than a year, why blog it today? The absurdity of it all was brought home to me tonight in all its glory. Anna was invited to a softplay party for her friend who was turning four. A private venue had been booked at £250 (for ninety minutes). I duly went out and got a present and card and drove her to the location stated on the invitation. The friend's mother was standing outside the venue in the cold and the rain with a large bin bag in her hand. Hi, she said, I don't know you but are you here for my daughter's party? I replied that we were. She handed Anna a present, that as usual must have cost the same amount as the one I had brought, while saying - I'm so sorry we're having to cancel, she woke up with chicken pox this morning but the venue won't refund at short notice so feel free to go in and play without us if you like! Paying £500 for your child not to have a fourth birthday party really takes the biscuit! I know it is more annoying to have four or five of their friends run round your own house but at least that way if they get chicken pox, you can simply put it back a week!
Posted by Phyl at 1:34 am