Hair would be good

By the age of two Marcel and Léon had had many haircuts. Had they not, they'd have had hair half way down their backs on their second birthdays. Their hair was thick, luxurious and fast-growing. A hairdresser actually commented once while cutting Léon's hair that it felt like the hair of a man and not a baby! Charlotte's hair was slower-growing than the boys' at first but today is at least three times the thickness of my own. Anna had thinner hair but she too had it past her shoulders by her second birthday. So what is going on with Amaia? I am beginning to wonder if I had run out of hair genes before she was conceived. Not only is she still almost bald, her temples are so thin, I can't even grasp the fluff there. Every morning Anna brings me various accessories to put in her hair. My heart sinks minutes later when the little copycat turns up holding the same hair clips or scrunchies and I am unable to attach them. I sometimes wonder if Amaia's start in primary school will need to be deferred, not because of maturity but because of baldness! Marcel was born with more hair than Amaia has managed to grow in two years! 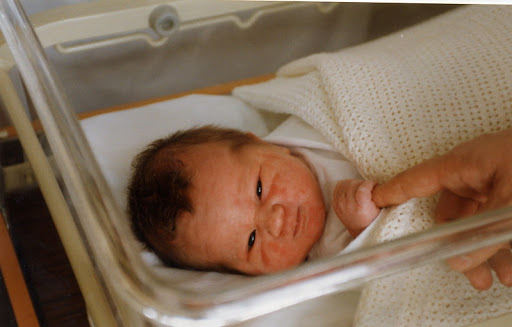