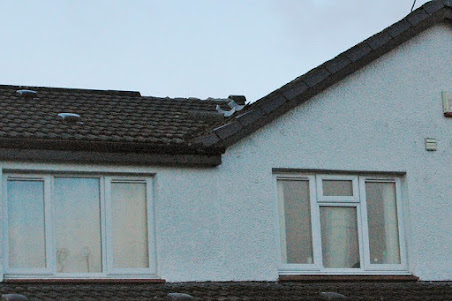 On December 7 2011 we received notice from the council that all schools were to close on the 8th because of a red alert weather warning. This was the first time in my life wind had shut schools. We woke up to find it was fairly blowy - we lost a fence, a few roof tiles and a pane from the greenhouse but all in all it was a little less windy than I had been led to believe. It didn't seem too windy to take the people carrier out.

On Jan 3 we received no warnings about the weather but I was woken at 6am by a much worse wind than the one the media had jokingly started calling Hurricane Bawbag. Slates were falling off the roof smashing all round my patio - going out without a hard hat was actually risky. We lost many more roof tiles second time round, possibly loosened by the first Bawbag, and the greenhouse was sent into orbit with a crash that made me think a car had come through the side wall of my house - we're going to be picking shards of glass out of the vegetable patch for the rest of eternity... I suppose we'll be able to grow pre-sliced carrots! And of course there's the tree issue up at mum and dad's.

I have to conclude that from a Newton Mearns perspective, the second Bawbag was definitely much worse than the first.

I'm just glad the useless insurance company hadn't actually got round to authorising repairs yet as nothing new was damaged, but everything that was damaged first time round was made much worse by the second of the Bawbags.
Posted by Phyl at 9:05 pm