THE PROBLEM WITH PARENTING 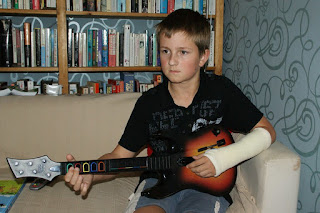 Marcel fell downstairs at school on Wednesday. Between periods at school, he tried checking the time on his mobile phone (kids seem to think watches are largely unnecessary these days, but I'm not so sure), tripped upstairs landing in a way that resulted in a twisted left arm, a cut right ear and a lump on his head. I was summoned. It was 2pm. I suggested we go straight to casualty as it was only 6 weeks and 6 days since he had last broken that arm. He decided as he had full mobility and no swelling, he'd leave it to the following day and given Scotland were playing a world cup qualifier less than a mile from the hospital that evening I certainly wasn't going to argue. He seemed fine, ate normally, played XBOX etc. Thursday he said it wasn't as sore, so went to school as normal. This morning he woke up complaining it felt worse. I assumed he'd been lying on it or hadn't taken a paracetamol but suggested casualty again and he agreed. The timing wasn't great. Having been nursing a chesty cough and temperature for the best part of a fortnight, I had allowed myself the thought of phoning my GP first thing this morning to get myself some antibiotics. Obviously knowing that casualty can take between 2 and 4 hours, offering to take Marcel to casualty ruled out my fixing myself :-( Off we trotted to A&E at the Vicky. Of course after parking at the new building and going to the old building, we were then sent back to the new one after half an hour's wait. I was beginning to wonder if the weather was very hot today or if I was just suffering a chest or throat infection combined with a wild goose chase. Obviously Baked Bean made it impossible for me to come for the X-ray so Marcel went in himself and by midday they were explaining how he had 'bent' rather than snapped his wrist bone - something fairly normal in that age of child. A cast was put on and he was sent home just in time to have missed an entire day at school. He was happy - a mix of skiving and imagining the sympathy all his little female friends would be heaping upon him by Monday. I was still feeling shite :-( The afternoon didn't improve any. Given it was sunny for the first time in what feels like months we had coffee outside. Anna was sitting on the trampoline eating chocolate buttons when she burst into tears. I looked over in time to see her panic as a wasp walked across her face. She tried to bat it away with the obvious result - a wee stung nose. So it was back to tlc for a different child. Some sugary water on the wound, a spoonful of piriton and a spoonful of baby nurofen later she calmed down bravely. Poor baby is only one and this is the second time a wasp has attacked her face. I was 35 the first time I was stung! So I guess the problem with mothering is you just don't have time to look after yourself. Maybe I'll get to the doc myself some time next week...
Posted by Phyl at 10:10 pm

And you're having more of the little buggers :-) Whose a clever girl then !!

...poor you! hope you're feeling better!