THE FEMINIZING OF CHARLOTTE 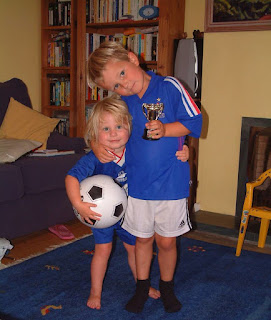 For years Lots has tried to hang on Marcel's shirt tails. As a two year old she quickly realized that being an avid dinosaur fan was the way to win her big brother's heart, by three a pink Power Rangers' suit was a must and thereafter football strips were donned to keep him happy. Despite her strong personality, she has always felt it necessary to conform to Marcel's expectations of her. When her little brother arrived four years ago, she simply thought of herself and them as three little boys. When I became pregnant with Anna, she told me straight out that she would not accept a female baby, and that her brother, when he was born, was to be called Bart. Eight weeks after this announcement, we went for a 4D scan and were told Bart was in fact Anna. Charlotte was not amused.
When Anna turned up, Lots did seem to like her just as much as she'd liked Pudge, and no further mention was made of the unacceptability of baby girls. Now that Anna is mobile, and talking etc something freaky is starting to happen.
Last week, Charlotte decided she'd grown out of her black (identical-to-Marcel's) Homer Simpson dressing gown. She asked to go shopping in town for another. I took both girls into Glasgow. The first shop I tried had small (up to age 8) red dressing gowns, and large pale or dark pink (age 8 and up) dressing gowns. She hummed and hawed and refused to commit to a non-acceptable 'pink' dressing gown. I believed my trip into town was fruitless, but we tried one other cheap store before giving up. It had candy pink dressing gowns with white spots - the sort of thing Lots usually curls her lip in disgust at, but these came in age 2-14. She bounced over and declared these to be nice and then proceeded to spend ten minutes explaining why Anna also ought to have a new dressing gown. Will you wear this pink dressing gown if Anna gets one too? I asked tentatively. Yes, came the reply! Almost on the verge of fainting because my child who is in p5 and who has only worn a school skirt twice was agreeing to pink, I raced to the checkout before she reconsidered. 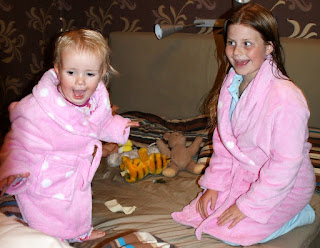 This weekend in Tesco the same happened. Charlotte found a T-shirt and cardie set in lilac that she thought Anna would like and conceded to buy the same for herself, although the older model only came in grey, but once again we are talking girls' clothes! Result!
Can this little girl who is obsessed by flowers and pretty shoes be feminizing her big sister at last after all my failed attempts?
It is a shame there's an eight year age gap... Charlotte really needs to buy her first bra, and nothing will persuade her to. I have a feeling we may need to wait another eight years before she agrees to buy the same model as Anna!
Posted by Phyl at 12:41 am