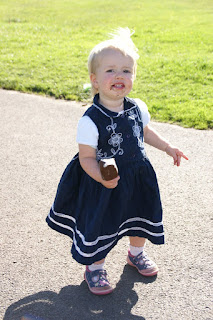 Watching how babies acquire language is a fascinating thing. Obviously, given my taste in men, I will never know the boring, normal, monolingual pattern of language acquisition. A health visitor once told me that bilingualism can slow language till the age of two, though given Marcel could say 'Don't touch that!' as well as half a dozen French nouns long before he could walk, I am slightly dubious. Anna has been slightly different in her learning. Although she understands everything in both English and Danish and has done for some time, she stuck quite rigidly to a core vocabulary of about 30-40 words until the age of 20 months. I am not sure what happened at 20 months and a day however because she decided to switch to the parrot stage, repeating everything in either language, or rather the bits of the words she likes - a horse is a 'ho', a cough is a 'co' and so on. Two, maybe three days after that stage was reached she decided to start having proper conversations with us. Instead of copying us and our sounds, she simply would initiate the conversation. Last week we got 'Daddy pay fwufwu up' - literally 'Daddy play frog up' - ie 'Daddy is taking a shower in the bathroom with the musical bubble frog upstairs'. When she coughs she now tells you spontaneously 'Nana co' - (she calls herself Nana at the moment). In the last week she has become very attached to a plastic baby doll and has conversations with it. 'Baby seat, baby bath, baby wash hair, baby juice'. She has also decided Daddy must wear 'fwoos' to go in the garden and if he dares set foot outside barefoot, we get a hysterical child running around the hall shouting 'Daddy sock, fwoos!' I guess language is here to stay and the point where her language could be documented in its entirety is now in the past.
Posted by Phyl at 11:50 pm