I woke up this morning to two stories that amused me. The first actually had me laugh out loud!

Derek told me on msn that having been rather sleepy when he put wee Gordy to bed last night after his bath he had cosily put on his vest, PJs and grobag, then put him down for his usual 12 hour snooze. Only this morning when he went in to waken him up did he sense something was amiss. His nose was greeted by a worse than usual odour as he entered the bedroom - Gordy is a prolific shitter you see. On further inspection, he found he had actually put the ten month old to bed last night without a nappy on. HAHAHAHA. Derek, they don't manage through the night without a nappy until they are two and a half or three! 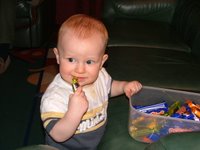 But it was definitely worth it - I haven't laughed out loud in months!

STOP PRESS: I am now actually crying with laughter having just spoken to Derek a second time on msn! Apparently to help, when he discovered his error, he ran with Gingerman's vest to the sink to steep it in some hot water, unfortunately failing to notice the adult-sized turd ensconced within which proceeded to block the utility room sink. HAHAHAHA. Ironically when I was round on Thursday, Amanda was just saying how Gordon's nappies were never very solid - she was wondering when they would start to become more adult-like. Perfect comic timing, Gordon, well done!

The other was an email from mum about her Cliffy concert last night. She wrote:
In front of us last night was a family of four [Mum, Dad, Son about 10 & Daughter about 7]
Son is waving a Danish Flag!!!

Nobody but me seemed to recognise this fact, but the woman behind the boy got fed up, not being able to see for this flag...and....asked him to stop waving it in front of her.
This was just before the interval.
At the interval, the Dad apologises and explains....."We are just excited, we have come all the way from Denmark for this concert!"
We ask, "Does Cliff not come to Denmark?" Reply......." Oh yes, but not until next March....and we have tickets for that concert too!!!!"
I'll say no more!
A family flew from Denmark to Glasgow to see Cliff Richard in concert? Is that possible? Thomas is in shock.

They are shurely not typical Danes ;-) I agree with T ,-)