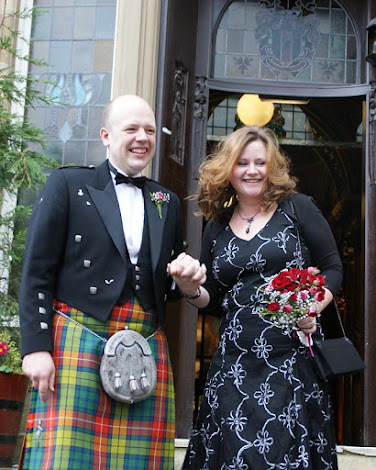 I was saddened to hear yesterday that the iconic Glasgow Registry Office where Thomas and I married was shutting down.

It's sad to think no one else will have the same wonderful memories as we have and we'll never be able to take Amaia back and show her where it all happened, given she was the only one of the kids who wasn't present.

My first wedding had also been in stunning surroundings - Glasgow University Chapel. Back then though, through immaturity and expectation I had ended up with a religious wedding, which was wholly inappropriate as I was an atheist even back then. And there was also the wee problem that I was marrying the wrong man back then! ;-)

Park Circus was wonderful, meaningful and it a beautifully religion-free zone. It was intimate and spontaneous and everything I had hoped for.
Posted by Phyl at 10:00 pm