Not bad for five 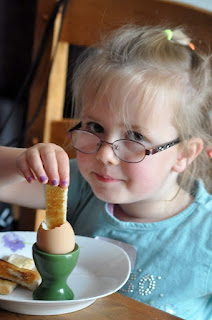 Tonight Anna was on dinner duty. She was standing peeling potatoes while I put a couple of pies in the oven for her. She was quiet for a bit then suddenly came out with:
See times tables mum? I've just noticed that all the answers to the nine times table add up to nine. Nine plus zero, eight plus one, seven plus two...

I know that's hardly rocket science but considering she's only five and won't officially be doing the nine times table for another 18 months, I'm quite impressed she'd worked out not only how the nine times table went, but that the sum of the digits was nine. In fact, given she's just finishing p1 she hasn't done any times tables yet. I can only assume she must have been eavesdropping on Léon's homework over the last year to get an idea of the concept of tables.

And I don't think I worked out the nines thing myself till a teacher actually asked us if we'd noticed anything about the nine times table when I was about seven. (And I'm not too bad at Maths myself!)
Posted by Phyl at 12:55 am