Growing the wings you need to fly 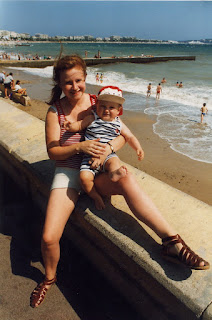 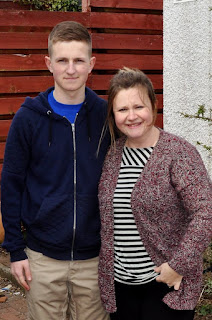 It takes minutes. You blink and in an instant the baby on the left becomes the boy on the right and you wonder where your life went. Suddenly you realize that although childhood takes forever when it's your own, when it is your child's, you are completely unprepared for the speed at which they grow up and into capable young adults who are able to lead their own lives. You feel a sudden pang of guilt towards your own parents for having done that to them not so long ago.

What has brought this to my attention? India. Marcel's school suggested that next year after the fifth years finish their Highers, it might be nice to go off and help some underprivileged kids in the third world, renovating their school, teaching them some English while at the same time testing their own stamina and maturity. There are 250 kids in the year and the teachers decided they could take a maximum of forty young adults. To gain place you first had to write an application explaining what you would bring to the experience and how you would go about raising the £2300 needed to transport yourself to the foothills of the Himalayas. From these applicants, a hundred would be chosen and interviewed by a panel of four - two teachers and two members of the World Challenge organization. After three weeks deliberation all hundred were tannoyed to assemble at the office last Friday at lunch break. They were to make their way to inside and receive their letter of acceptance or rejection. I had hoped Marcel's maturity would shine through. He's been through a lot over the last few years. He's lived through divorce, estrangement from his father, and three other members of his French family, watching my dad die of cancer, and my mum suffer a stroke too. The recession has been tougher on him than on many of his friends. Unlike those who receive endless cash donations for lying in bed all weekend Marcel works Mon-Fri 6-30am to 7-30am outside in all weather with only Xmas day off in the year and Sunday morning from 5am to 9am in the corner shop. He's also worked hard academically, sitting his first Int 2 in 2nd year and his first Higher in 4th. Next year he's signed up for an extra Advanced Higher over and above his five Highers. So I hoped this would help him articulate his case. He deserves this kind of break that we could never pay for and that others with more means would take for granted. He was determined to do it for himself and even more so to see for himself how lucky he really is in a global context. He can't wait to meet the kids and play with them, as he does with his own younger siblings.

I knew he was being told Friday and when I hadn't received a text by 3pm I feared the worst but it was a very upbeat boy who jumped off the bus clutching his 'We are delighted to tell you...' letter after school. He and two of his friends had made the cut. Now all he needs to do is work out how to raise his airfare. Much as we'd love to help him, self-employed, six years into a recession with a pre-recession mortgage, four other kids to pay for, and no sign on the horizon of his biological father, he's on his own. But I have every confidence this next year will make my little boy into a man.

And what about this for an itinerary for someone who will only be 16 when he goes?
Posted by Phyl at 11:48 pm