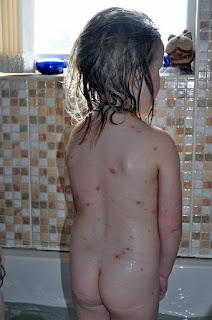 Well we're on day 5 now of Anna and the pox and so far things aren't too bad. Now that I look back at the photos taken on Tuesday at lunchtime, she had one spot then, I just hadn't realized what it was going to develop into, until dinnertime when the whole of her hairline went spotty. So on a scale, she is a little worse than Marcel and Charlotte, but so much better than Léon when he caught it.

Tuesday and Wednesday we used calpol and piriton. Everywhere is sold out of calamine as there's a major chicken pox outbreak at the moment in the area. She ate normally and didn't seem up or down. Thursday floored her. She slept with us overnight, she slept all day and only drank Heinz tomato soup, refusing all other food. Friday found her sitting at her seat at the breakfast table, hungry and back more or less to normal, though she flagged around four and fell asleep. Today she's back to normal, has been out playing with the neighbours' kids (well the ones who've had the pox!) and everything is drying up and scabbing over. Tomorrow I expect they'll start to disappear and then we'll need to start the countdown to Amaia's outbreak, crossing everything in the hope of an equally light dose.

It is nice to reminded why it had seemed such a minor disease when Marcel and Lots got it. I have been so hung up on it since 2007, living in fear of the inevitable because it hospitalized Léon that I lost all sight of the fact that usually it is merely a minor inconvenience that affects them less than the common cold. And the Easter holiday timing is perfect, she's not even missing a day of school. Anyway, let's hope Amaia is just as lucky and not another Léon... 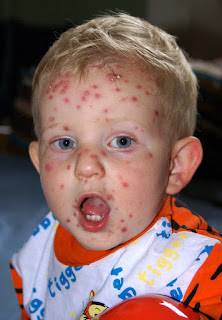