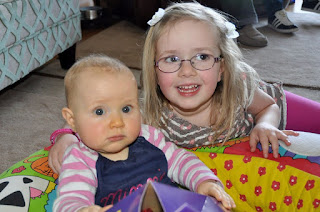 We had a nice family Easter afternoon yesterday. The kids played happily with their Scottish cousins and then came home, had a nice meal and went to bed excited after a weekend of Easter eggs, filled with the prospect of their grandparents flying in this morning from Denmark.

This morning went well too. A glorious day, they touched down in Edinburgh twenty minutes early and we were back in time for lunch. At dinner Anna was a little moany. I took her through to the bathroom to get a closer look at one tiny lump she was complaining about on her forehead. Under the bathroom light I thought it looked suspicious so lifted her hair to find three spots on the back of her neck. I've had five kids. I have been through this four times already. Marcel once, Charlotte twice, mildly (both times confirmed by my doctor before you tell me you can't get chickenpox twice) and once from to hell and back (via Yorkhill) with Léon who suffered in a way I have never seen a child suffer with chickenpox. I didn't need to lift her t-shirt but I did anyway. There were three or four more under her vest.

She's gone to bed none the worse, so far and I am hoping that we are revisiting a Marcel or Charlotte dose, and not one that puts us in Yorkhill. And the next three weeks are going to be long as we watch both Amaia and baby Catriona for signs of the dreaded lumps.

I'll update in a day or two once the extent of the dose becomes more obvious...
Posted by Phyl at 1:24 am