And while we're on the topic of illnesses...


Back in 2006 I was in New York with Léon. On my flight home he started to develop a seriously strange rash that looked like little circular targets on his whole body, at the same time he started to swell up, looking like he'd spent ten rounds in the ring with a heavy-weight boxer. By the time we touched down, he couldn't open his eyes, he was so swollen. I went straight from the airport to Yorkhill where they analysed him, tested his urine, and scanned his liver and kidneys. They kept him in and eventually after a day sent him home, still scratching their heads. He was recalled several times for scans over a six month period and eventually they threw in the towel and told me they had no idea what it was.

A few years later, I was discussing it with a friend and her husband asked to see the photos. He was a hospital doctor but again wouldn't commit to a diagnosis, not even a hypothetical one.

It's always been in the back of my mind but I gave up analysing it years ago. Then on Sunday one of my best friends in the whole world, Karen (who is from Glasgow but is currently working as a director in the Medical faculty of Lancaster uni) dropped by for a coffee. Out of the blue she mentioned having come across pictures of people with the same symptoms as Léon all those years ago. As soon as I googled images, I felt like I was looking at a photo of Léon. Finally, and from an unexpected source, I know what my poor baby had on that flight six years ago. It seems to have been Erythema multiforme. Just look at these images. I wonder why no one worked that out at the time... 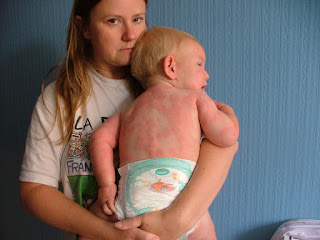 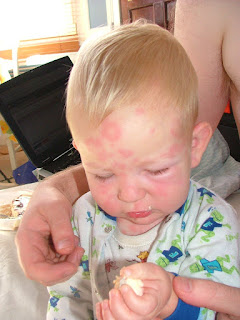