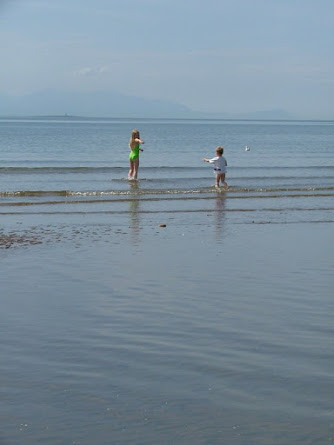 I decided to take the kids down to the coast today to make the best of this nice, unScottish weather. Marcel of course decided it'd be cooler to hang about at his friend's house so the three little ones and I set out for Ayrshire. Given both Anna and Léon wouldn't care where they landed as long as there was a sandy beach, I decided the obvious choice was Prestwick given it has free parking and is less than half an hour from the house. We arrived at 1-30, spread out the picnic blanket, made sand castles and collected shells. After an hour or so Charlotte noticed her swimsuit had been left in the buggy from a previous trip elsewhere. She asked to go for a swim. Believe me it isn't too common to hear your child ask to go for a swim in Ayrshire... in fact the last time I went for a swim in Ayrshire myself was on a trip in 1980! I still remember it was bloody cold! (And that was years before I became accustomed to my beloved Mediterranean!) She seemed to skip in like we were on the South coast of Spain. Léon took off his shorts and followed swiftly. Puzzled, I picked up Anna and waded in in my skirt. The water was noticeably warmer than it usually is in Cannes in July! I stand amazed.
Posted by Phyl at 11:56 pm

Email ThisBlogThis!Share to TwitterShare to FacebookShare to Pinterest
Labels: weather