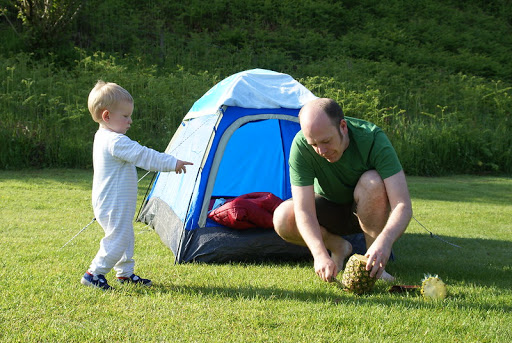 Léon's had a morning filled with bilingual dilemmas. I was being a bit lazy so instead of reading an English or French book to Anna and Léon this morning, I picked up the first thing I saw which happened to be a Danish A-Z (or rather A-Å) picture book. All was going well. I was chatting away to Léon in French asking him about various pictures. The first page contained the Danish words for a monkey, a face, an arm, a duck, an elbow, a pineapple and a cucumber which all begin with 'A' in Danish. Pudge was happy for me to mention le singe, le visage, le canard, le coude, le bras and le concombre without a bat of the eyelid, he happily pointed them out for Anna but he got quite upset when I said 'Tu vois l'ananas?' You see, although I am allowed to speak English and French, I am not allowed to speak Danish, just as Thomas is not allowed to speak English. I am allowed to understand Danish and hold conversations where I reply to Danish in English but when I say a Danish word, Léon says 'That's not your word, that's Thomas's word, your word is X'. What had thrown him of course was that Danish has quite a few borrowings from French. So when I mentioned 'ananas', he took it to be Thomas's word for pineapple and therefore thought I was daring to use a Danish word. I tested my theory when we got to 'c'. I was allowed to mention le chocolat, l'ordinateur, le casque and le vélo but le champignon and le citron were no-go areas - they were 'Thomas's words'. It's funny he thinks of these three words as Danish and not French! I guess Thomas is the chef in our house so food's first language in Léon's mind is Danish.
Posted by Phyl at 4:38 pm