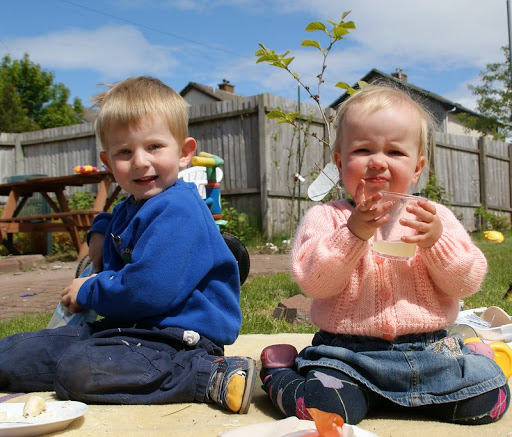 For the best part of the last three weeks we have had every meal outside. We have even had breakfast under the parasol some mornings. Bliss! It's almost been like living back in France, but without the olive trees in the garden. Yesterday and today we had to eat in the dining room. It was quite depressing to come back indoors but not for the reasons I had expected. Tonight's dinner was running late so I made some chicken noodle soup as a starter - talk about Armageddon! The table and floor were swimming in soup, there were noodles all over the table, noodles the full length of the ornate table legs and stretching all the way to the coffee room door. Half a kitchen roll later we had pork and potatoes with gravy and cauliflower. Pudge was so covered in gravy by the end of the meal that I was terrified he'd touch the wallpaper and Thomas was elected as the person who should strip off completely and carry the two grubby monsters to the bath. Eating outside where the noodles and soup simply fall on the grass and where, by the time they've run around the garden for an hour after dinner, the sticky, greasy hands have lost some of the element of danger is just so much less stressful :-( Come back sun, now!
Posted by Phyl at 11:34 pm