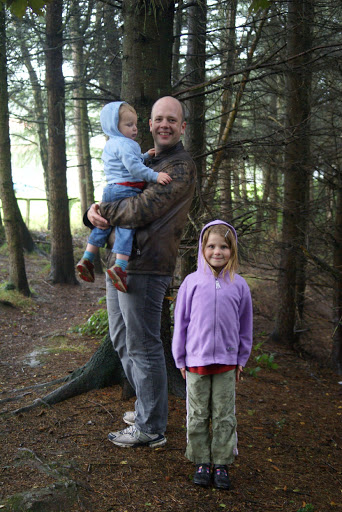 We had a neat plan for the afternoon. Marcel was invited to a friend's house for 2 hours to play and the sun was just coming out when we dropped him off, so we drove to Newton Mearns, parked the car and went for a walk through the woods eating the beautiful ripe brambles from the bushes, following the little stream to the swing park. It was idyllic - the rain had stopped, the woods smelled wonderful, the kids were happy. We were less than 10 minutes from the car when the first raindrop hit, no problem...Then the rain got so heavy we were soaked through to our underwear, the road flooded so walking back to the car necessitated a wade through a shin-height puddle. We couldn't go anywhere in that state so had to pay an impromptu visit to my parents and sit in our underwear (not a pretty sight at 6 months pregnant!) on their couch while they dried our clothes over their radiators! Not quite the afternoon we'd been expecting!
Posted by Phyl at 11:36 pm

Email ThisBlogThis!Share to TwitterShare to FacebookShare to Pinterest
Labels: weather