As I mentioned last Thursday, school's off. We got word late on Wednesday that schools would be closing from Monday, but that anyone who could already keep their kids home as early as Thursday morning were encouraged to do so.

Thomas's boss phoned around the same time to send him onto compulsory working from home and my college emailed me that classes were going online too. So Thursday was a bit of an odd day - some kids were still at school, those who were home had no idea what they were meant to be doing and better still it was a warm, blue-sky day. It became an impromptu holiday for four of the five of us. It wasn't to last, however.

We were emailed times for each child to turn up at school on Friday morning to pick up a laptop and a home study pack. 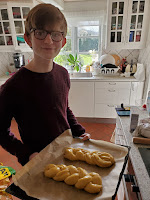 By 11am on Friday we were ready to go. Each child disappeared into their room and did a couple of hours of Danish, German, English, a little Maths and some History. So far so good. 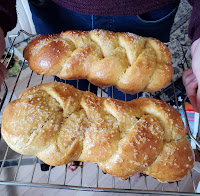 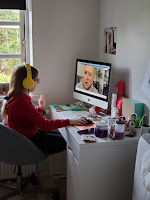 Monday they got up slower than normal, not reaching their desks till around 10am and by 1pm Léon had gone off on some brioche-baking tangent. You could of course argue that watching French baking channels on Youtube and producing a lovely pair of loaves for afternoon coffee is also educational but perhaps not what the school intended. Other than lazing around with a novel each, not an awful lot was done. Monday night we got a message from school that Skype school was starting this morning.

They'd to be up, dressed and have logged into Google meetings before 10am! Anna's seemed to go fairly well and her teacher just checked how they were getting on and if they needed help. It was over in just over an hour. Amaia was so pleased and excited to have her teacher, Henriette, in her bedroom and even happier to see all her classmates again, but more importantly the teacher started the lesson by asking each of the kids what they had managed to do since last time. What a motivator that turned out to be! Her Skype class finished just before 12 and straight after lunch she disappeared like a shot. She was not seen again till 4pm! She's done most of her spelling book, read most of a book in Danish and English, done every Maths sheet she could lay her hands on etc She's obviously gearing up to impress Henriette when they reconvene tomorrow at 10am. Into the bargain, with all of them off working all day, even Thomas and I have managed to fit in all our work today.

Léon has been friends with all the children in the village in Italy where his grandparents live since he spent the whole summer there three years ago. The kids are, of course, in quarantaine and quite demented with boredom... Today they Skyped Léon with a solution! They'd met him online for an hour a day to help teach him better Italian. It's so sweet. He's even been given homework for tomorrow 😂

Long lie, no packed lunches to make, but kids working perfectly and learning loads - I could get used to this!😂
Posted by Phyl at 7:18 pm