There's loads to blog about at the moment, and yet nothing at all.

Life is so manic, I have no time to set pen to paper or fingertips to keys, for that matter.

We're now on day twelve of home school and isolation. I'm beginning to think there must be a god after all as the weather has been glorious every single day, and without that we'd maybe all have lost our minds... only kidding, of course, I know it's random! (Had you worried there for a moment, especially you, Gillian😂!)

So, we've come up with a reasonable routine. We've somehow managed to keep the kids getting up at a reasonable time, ok not their usual 7am, but they are up and ready to work by 9ish which is a miracle more than two weeks in. Normally Léon and Anna at least would be getting up around lunchtime if this was two weeks into a school holiday. So, I'll give us a wee pat on the head for maintaining that already!

Straight after brekkie, the girls usually tune into the daily science shows that Randers Regnskov (Denmark's version of the Eden project with animals thrown in) are doing. I saw there were UK ones too but given the kids are likely to be hearing more English than usual at the moment as they can't see their friends, I figured the more lessons in Danish, the better.

I try to start an hour before the kids or it gets too mad. I do my own Danish homework then often have an hour online with my Danish teacher (Mon, Weds, Fri), followed by more homework. I take ten minutes out whenever I need to set up one of the kids' google-meet lessons, then sigh with relief when their real teachers are in charge of them for an hour or two. Interestingly, Amaia seems to do twice as much work every time she's seen Henriette (her Danish teacher) or Sten (her Maths) teacher online. I guess, psychologically, it must make it more real for her.

I've got Léon teaching Amaia Maths and both of them helping Amaia with her Danish spelling. She is also happy to sit working her way through spelling and grammar exercises online in exchange for a wee minecraft session, sometimes with friends from her class. Then I've negotiated that if Amaia reads her Danish book to me when I stop work for the day, I let her also spend the same amount of time reading me an English book of her choice. She hasn't sussed that I'm sneakily trying to keep her English up to scratch, because obviously nothing they do in their English lessons at school are of any use to her. Occasionally, I need to take an hour out if either Léon or Anna needs a German lesson, but otherwise they are more autonomous, working through Danish books, writing essays or similar. Obviously, a reasonable amount of procrastination has also been factored in!

Thomas is more or less managing a normal day's work, with interruptions to teach Léon to bake bread - home economics but better. They have music lessons on Skype too. Anna's been drawing and trying to write songs - we've not been let in on those yet!

Léon's Tuscan friends (from his summer there) are all under serious lockdown, of course, so they are running one-on-one Italian lesson with him an hour a day. He's not doing too badly. They are definitely pushing him a lot faster than language learning in your average Scottish high school which is great. It's quite sweet, they are even giving him lists of Tuscan dialect equivalents for the standard hoch-Italian words he's been learning too!

When they finish up about 3pm, Léon's been digging the field for us - call it PE meets self-sustainability, the girls do dancing on YouTube instead of PE. They've also had three bonfires with sausage sizzles this week - I'm sure that is a useful outdoorsy lesson of some sort too, and Léon now has a lovely bonfire area in the garden, should his social life ever return. Then it is over to the garage to paint rooms - I'm not sure what lesson that is - art? DIY? We finally throw in the towel and sit down around 7pm. 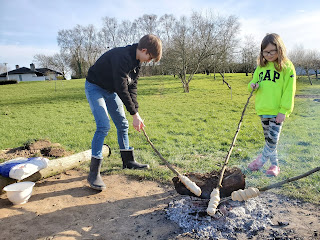 The kids are doing their own washing and hanging it out. I'm as busy as them, so why not? Léon was seen digging the field yesterday in PJs when he accidentally washed all his clothes - or all his trousers at least!

Léon is the most extrovert and sociable of us all and is therefore starting to find his isolation from friends hardest. He keeps telling me how much he misses school, but he means his friends, to be honest.

I think in a smaller house, with no garden this would be a lot harder. Having ten years of working from home definitely helps most, not just because we're used to it, even if it isn't our preferred option, but also because the kids are used to having parents who could need to be left in peace. But still, by the end of the day when Thomas has done his work, I have done mine and the kids schooling has continued as best it can, it is hard to fit in normal tasks such as tidying, hoovering or similar. We're simply out of steam every night by dinner. It'll be interesting to see how long we can sustain the pace, particularly after the Easter holiday week.

To be honest, the hardest bit of it all has been Aula - my Danish parent friends will relate. It's the system Danish schools use to contact parents, send letters, appointments, homework and all the rest. Imagine Glow, combined with all your WhatsApp mums' chats, combined with the kids' class Snapchats and the school weekly news letter (yes, that bad!). With three kids in two schools, we're drowning in 15 official messages a day - you then see every parent or child's replies to each of these messages, so you manage to miss the one asking you to go online in an hour because it's hidden in amongst forty messages asking for clarification on a finer point of German grammar. My phone buzzes all day long and it always reads: Et nyt opslag 'XXX' er blevet delt med dig. It's doing wonders for my Danish reading skills - I can even skim Danish quickly now to filter out the dross! Until I moved here, I was mainly good at understanding spoken, rather than written Danish.

I'd say I can deal with working from home, and I can just about deal with home schooling, but indefinite Aula - I'm not so sure!