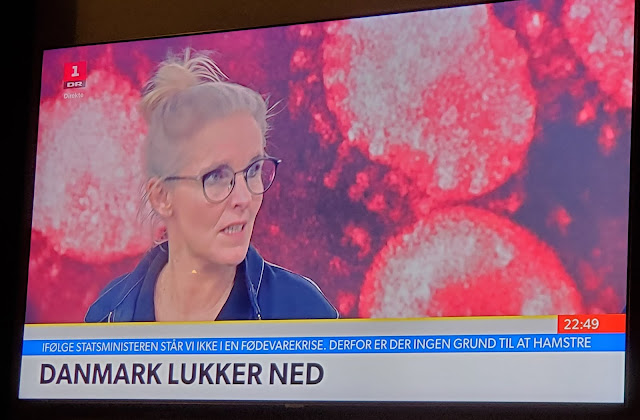 It finally happened last night around 9pm. Denmark has closed down!

It's been a weird limbo week - it's been brewing under the surface since the weekend and it had definitely begun to feel like it could only be a matter of time. We'd already bought some extra pasta, rice, loo rolls, tomatoes, pesto and UHT milk about three weeks ago so weren't really worrying about that aspect. The house is big enough that we have a chest freezer, so we could probably manage six months if necessary!

At the weekend we were sitting on 20 odd cases of corona but by Monday morning things had started to double and by Tuesday night we'd been told to try not to use public transport at rush hour. I'm attending an adult language school at the moment and it usually takes me around 25 minutes door to door, but with many heeding the advice Wednesday saw the journey time increase to almost 40 minutes. Conversely those who'd come on the bus and train were amazed at how empty things had been that morning. I also had to contend with even more bikes than usual. Things felt different.

No one could concentrate in class on Wednesday - rumours were flying about the office staff being tested in the school and most of us were sitting on our phones watching the figure of infected multiplying at around fifty and hour. The rumoured staff infections were enough to see at least one member of the class simply walk out mid-morning with a polite 'tak for i dag', followed by a swift exit. Our spoken Danish skills increased as the day went on when new figures were discussed and plans for the rest of the week debated. Come 1-30, when the teacher came out with her usual 'vi ses fredag', most of us simply replied with 'måske' rather than our usual, 'ja, vi ses', and it looks like we were right, we won't be seeing her this Friday, or any other Friday for the foreseeable...

Schools are closed from Monday to allow time to find babysitters as the government is strongly recommending against contact with grandparents, but anyone who can already keep them off from today is being encouraged to do so. Amaia thinks she is now on an extended minecraft holiday, while Anna has opted to play with dramatic experimental make-up and Léon has gone out to meet up with his friends - hmmmm, not sure this is what Mette Frederiksen had in mind...

The dentist has texted to cancel Amaia's appointment today, the music school has texted to say there will be no individual or orchestra practice before Easter and Léon's talented musicians programme in Odense has now been shut down till the end of April. I'm getting about an email an hour from the two schools with updates and instructions and the girls were officially devastated when the latest one asked them both to attend tomorrow morning for ten minutes in order to pick up a laptop and a study pack each. Thank goodness, I think three or four weeks of them home might drive me completely batty if we can't go out and do anything. Léon has arranged a 'study group' with three or four friends to work through his study pack - I expect that will be him doing their English work in exchange for them doing his German but whatever! It will keep some semblance of structure in their lives.

I'm sincerely hoping Thomas and I stay healthy as we know no one here so us in hospital would leave Léon who's only fourteen and a half, home alone in charge of his younger siblings! I know he is actually capable but I'm less sure it is legal!

Obviously with my ex-husband living in Shanghai these days, I have been kept up to speed more than most on how this thing is developing and how to deal with it, which helps. It's nice we can finally have an adult conversation, even if it has taken the best part of fifteen years!

It is fascinating to watch how other countries are reacting. I know I am well known for my anti-Tory leanings but I can't help but think this is another thing they are majorly cocking up and my kids, mother and brother's family are still over there! Football matches, Cheltenham, the House of Commons bursting at the seams during the budget yesterday, open schools, unis, no change to public transport etc - seriously? Boris is awol again, except when he's suggesting that letting the virus move through the population might be the way to go? I mean, come on?! I am watching the 'too little too late space' on tenterhooks.

Of course, we're hearing a lot from various other places. I have heard from Thomas's folks who are more or less under house arrest as they live in Tuscany. The Italian authorities are struggling to treat anyone over 65 now, as so many people are ill. I've spoken to my three French nieces, they all have primary school aged kids, and one has a toddler so they are a bit on edge. I've also spoken to my French sister in law (their mother) who is in her 60s, and of course, they are all worried for each other but not yet seeing much in the way of fall out. Lottie has spoken to the two Spanish families she au pairs for in Madrid every summer and their kids are all home now with their schools closed. They're saying it is a shame she can't come over now to babysit! On a positive, they've asked her back in a couple of months so she's desperate for it to blow over so she can go back to her favourite place in the world!

Charlotte was meant to be coming here in ten days to study for her exams but she's now worried she might not get back to the UK for those so she's put that on hold. Of course, if the uni gets shut and an alternative to exams is implemented, she might be safer with us on our large, rural plot of land, rather than in the city, but that decision will need to wait a week or two.

Marcel is currently living in London, but he's young and fit so I have to stress that to myself, but of course, he's still my baby, even if he's nearly 23, so everything equal, I'd rather he came here to work from home too, even though I know he won't😥