Training for a change 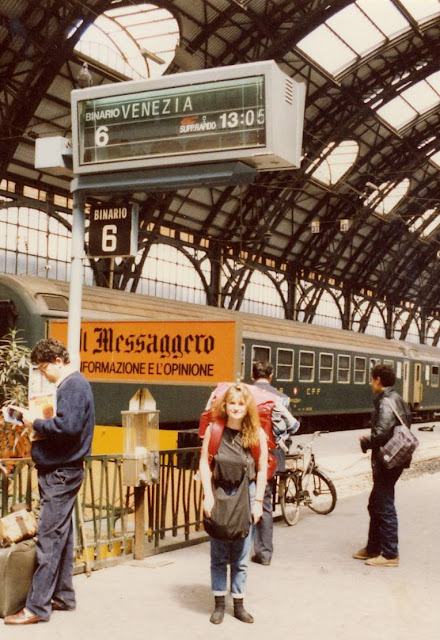 At the age of eighteen I put on my first rucksack and it didn't come off again till I was 31! And even then it gave up on me rather than the other way round. With Marcel in a papoose on the front and my trusty friend on my back, I set out for Frankfurt main airport one winter's day and although Marcel and I ended up in London, the trusty friend ended up in Osaka of all places (it was better travelled than me!), and by the time it was repatriated, it was in several pieces - thanks British Airways! 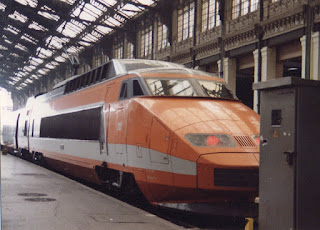 I was young in the pre-Ryanair era. I wanted to see Europe but I was a student with no money so that meant two things - Interrail or Eurolines! I never went any further than Metz (via London, Amiens and Paris - 1000 miles) on Eurolines - 1000 miles was my knees' bus limit! Anything over 1000 miles was train material. And, of course, there was no Channel tunnel either so I spent many an overnight lying on the floor of the Ostend or Dieppe ferry fighting to retain my dinner despite the best efforts of the winter waves. My ferry to Dieppe once broke down within sight of the French coast but in such bad weather that they were forced to leave us spinning out of control for about four hours before the weather calmed down enough to tether us and drag us in. I think I was the only one that night who successfully kept down all their food. Many ferry hours had taught me that lying on the floor gave you the best chance of winning against sea sickness! By the time I reached Paris that night, my connection was long gone and another night was spent on a station bench alone - all 1m60 of me, lying on top of my rucksack to keep it safe, dodging flashers in the night!

Taking trains alone all over Europe as an 18 year old when you are my size taught me loads of life lessons. I learned how to protect myself from unwanted male attention. It isn't a lesson I particularly wanted to have to learn but it is a lesson that served me well in life. The first time I got on a train alone (the Glasgow to London at the age of 15) I woke up after dozing off to come face to face, or more correctly face to genitalia with an unwelcome morning alarm call. Seriously, you need to be sad to sit masturbating in a train carriage beside a child. By 18 I had learned not to choose a compartment alone, to board the train not an hour before departure when you could easily get a seat, but six or seven minutes before when there were still seats but also plenty of protective witnesses. That way you could choose who to sit beside rather than having them decide because you were on first. I learned to latch on to other women, or family groups. I learned on many train journeys to Italy that if you looked a wee bit wee and vulnerable and skinny, some huge mamma or nonna would take you under her wing and force-feed you from the bag of cold pizza, pasta and salad they always had in tow!

Apart from that, training through Europe taught me some useful strategies for coping with the unexpected. When a train didn't stop where you expected to change (I once ended up in Rome at 6am when the train sped through my change in Florence in the middle of the night), you had to come up with a new route, new tickets, you had to charm controllers into allowing you to use your original ticket where possible, you had to find a different point in your journey to eat, you had to jump out and find a call box to phone ahead if you were being picked up. Those life skills were all infinitely useful for adult life. You learned when to play the dumb foreigner, and when being fluent in their language worked better.

But more than that, you met interesting people, you watched the landscape change - I still vividly remember Lyon is the point in Europe where the ground turns from green to brown any time after June. I know Avignon is about the limit for natural olive plantations and I know there is nothing more majestic than the first time you train down Italy looking out at sunflower field after sunflower field.

You see places you'd never have seen. I went by train from Konstanz to Venice (via Switzerland, Milan and Verona) in my early 20s with my still great friend Gillian. Had we flown, we'd have had a lovely week together in Venice. As it was, we took the train, so when we passed through Lugano, we looked at each other, said - look at that beautiful place, jumped off the train and found a hostel and extended our trip by four whole days!

So last month when Charlotte had a 12 day gap between two au pairing jobs in Madrid, I was secretly pleased when she decided to get a cheap ticket to cross part of Europe by train, alone. Lots is a plane baby - she had family abroad so was on a plane by twelve weeks old, long before she ever saw the inside of a bus or train. She flew from Madrid to London, visited Marcel and Milly, then hopped on the Eurostar - another experience none of my kids has ever had. That is weird to me. I went on Eurostar the first week it opened, when they were still handing passengers sparkling wine to celebrate. I didn't have anywhere specific to go, I just fancied trying it as I'd done ferries and planes to death!

Charlotte went through England, France, Belgium, the Netherlands and Germany over the course of fourteen hours. She had to deal with a train arriving too late in Hannover for her connection. (Unlike me at that age, Charlotte is a Spanish speaker, not a German speaker so that added another layer of complexity). She then had to deal with missing the Hamburg-Flensburg direct train so having to work out Neumünster was a reasonable next stop to look for a train to Flensburg. She arrived at 10pm so learned how it felt as the train thinned out as darkness fell and she got to see all of Germany.

When I picked her up in Flensburg, to save her the final 90 minute train to Funen, she had grown up a little more. 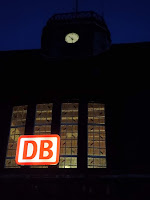 As an addendum to this post which I wrote, other than the last few lines, a couple of weeks ago, but then got distracted... This sadly comes the day after the UK decided that going forward Interrail wasn't worth preserving for the youth of today, after nearly fifty years. I truly hate the insular, sad, angry little country the UK is becoming. It is as if they looked at my life and picked it apart. Interrailing isn't ok, marrying EU nationals isn't ok, living with them in the UK isn't ok, being a dual national kid makes you inferior, and god forbid you should bring your family up bilingually when monolingual is an option.

I hear that almost as soon as I hit publish, the Interrail ban got reversed - didn't know I was so powerful, lol - good news for the kids though.