It's been the weirdest back-to-school period in all my 17 years of parenting... I keep wakening up in a cold sweat wondering when it'll come to me what I've forgotten, because, surely I must have forgotten something? Especially as it has cost me next to nothing! Seriously😲

Back in June I ordered two new school bags as Anna's and Amaia's were a bit past their best, Léon had recently got a sporty one so didn't need one. Unlike in previous years, no lunch boxes were ordered because they don't use those here. So, I have ordered no shirts, no trousers, no pinafores, no skirts, no ties, no jumpers or cardies, no long grey socks, and no long white ones. I have not had to drag them to Giffnock to buy hoodies with logos, sports tops, or PE kits. Blazers have neither been ordered in a larger size, nor dry-cleaned. No overpriced braiding to denote their school year or achievements has been added either. I have not walked the full length of Silverburn and Braehead with a sulking daughter in tow refusing every pair of black school shoes on sale. I have not been compelled to force my daughters into these shoes that are so hopeless against the Scottish climate. I have not cried in frustration when the only two styles of skirt acceptable at the high school are too loose or too long when tried on in shop after shop all over Glasgow and beyond. Nor have I had to fill my basket with drab Scottish-climate-grey clothing that adds to the further depressing monotones of a November morning. The tiny p1s here (who are 6 to 7, not 4 or 5) won't have to fight tiny shirt buttons over and over all term long. I've not had to order primary rain coats and winter coats that they'll refuse to wear on weekends, so are surplus to necessity. I won't even need to dread waiting for Léon to come out with his usual twice or three times a year favourite phrase 'I was playing football at lunch time and the sole came off my (black, Italian dress) shoes so, can we go buy another pair (10 miles away at a minimum cost or £35) preferably before tomorrow as I'm not allowed to wear anything else'... I'm sure didn't need that extra £100 a year for anything anyway. 😐

The Real Madrid strip Amaia has worn all summer will be her PE kit. Anna is more grown up so has chosen to wear her leggings and a t-shirt of her choice. They will wear their cheap jeans on the colder days with any t-shirt or hoodie they choose. When it is hot, they'll wear shorts, crop tops, vest tops. When it rains they'll put on a waterproof anorak, when it snows they can wear a hoodie, a woolly jumper or a snowsuit should it please them. I've even seen the smaller kids here turn up on wet days (of which there have been very few 😀) in outdoor onesies made of waterproof material. How sensible!

I remember teachers at home always saying they hated 'dress as you please' days because the kids couldn't concentrate in their own clothes... of course, that was because their own clothes were a novelty, which made the day exciting and different. There was also the stress and pressure of what to wear to be accepted, conform, not stand out or stand out the way you wanted to... but again these stresses just don't exist when it's an everyday event and all you know. It is every day and mundane and in the same way Charlotte doesn't stress every day about what to wear to uni, she simply sticks on her jeans and a top from New Look or similar, the kids have already started finding it normal to dress as they would on a weekend. After three weeks at school last term, they had already ascertained there was no peer pressure to wear specific brands or styles here, they all dressed completely boringly in shorts, jeans or leggings with a t-shirt or jumper. 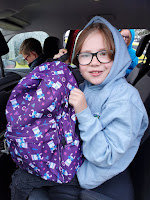 Amaia is obsessed with llamas at the moment so wants to express her personality through t-shirts with llamas on, or Inca patterns. Anna likes short pretty-coloured t-shirts so that will be her theme this year. Léon will probably use his t-shirts sporting various geographical locations - he has a Honolulu, an Oslo, a California, a Vancouver etc. That says something about who he is. He has his bright purple Fiorentina football top too that he might wear when the fancy takes him and has asked for a Scotland football strip for his birthday so no one will ever be in any doubt as to where he's from. They are becoming individuals in the own way and that pleases me.

To be able to wear sandals on a hot day and not feel uncomfortable all day made them practically purr every morning in June. To wear waterproof jackets with hoods in the rain was a welcome change for Léon after two years in a very heavy when wet woolly blazer. I know technically their high school allowed winter jackets as long as they were removed at the front door and stored in lockers but because removing and storing was a hassle, almost no one could be bothered. I'd say less than 5% of the kids wore anything other than the blazer. So on the worst and wettest winter days, kids were seen climbing the hill in a hoody and blazer, soaked through and miserable looking, and presumably took a long time to dry off.

At school the girls will each be given a tablet to do their work on and Léon will receive a laptop as standard issue from his, so there will be no status wars there either - they are all on an equal footing here, no matter their background, which is lovely. 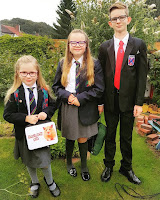 I know uniform is divisive - many love it, especially those who grew up with it. I don't think I ever questioned it till I taught in France. And I'm sure many will complain they just don't look smart like they did (pictured here last year) at home and yes, being in strict schools in East Ren, mine did look very smart, but although I adored their schools, both academically and for their warmth and nurturing atmosphere, I was never a great fan of the uniform, especially after the primary scrapped the poloshirts and sweatshirts in favour of old-fashioned shirts and ties seven years ago.

So today, for the first time since Marcel left nursery in 2002, my kids will start school fully as themselves. Let's see where this adventure takes them. 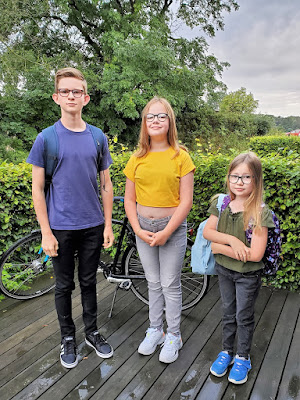