My kids did music back home. Léon is starting his 7th year old violin and was a member of East Ren youth orchestra and East Ren folk band. Anna was about to go into her 3rd year of guitar and Amaia had just finished year one of viola. They had group lessons that lasted half an hour a week. Léon had taken it for granted he would continue here as he has a real ear for music and loves everything about it. Both girls, despite having asked to play, seemed fairly indifferent to their lessons at home. They would have continued out of habit, but given the choice of starting somewhere new, they might just have likely opted out here. Thomas decided to let them try for a term before deciding so signed them up here on arrival. Here the lessons are individual, so it wouldn't be so much a chat to your music mates thing as a serious music thing. 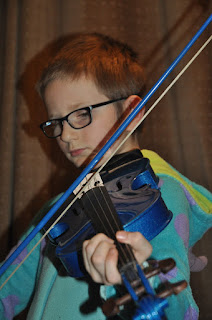 Music lessons started back yesterday. Both girls looked fairly aghast when they were told they were to meet alone with a Danish music teacher and started tentatively trying to wriggle out - I'm not sure music is really for me. I can't go, I don't know the names of the notes in Danish etc etc

We dragged Anna in like a dog at the vets and went back after half an hour to a very changed opinion! She came out leaping and squealing with joy: Kristian is the coolest guy I ever met, Mum, he is a music teacher but he turned up in a string vest and shorts and a cap and has tattoos and piercings and this cool electric guitar and he says he'll teach me Ed Sheeran and Justin Bieber and everything! I never want to give up music ever. I want to be a singer when I grow up!

Half an hour later Amaia, who had entered 'Agata's' room staring at her feet like a little mouse, bounced back to the car too: Agata is from Poland and she can speak Danish and English and German and she's going to teach me real songs unlike the boring stuff Rachel did at home. And she's so funny and sweet and helpful and she wants me to go with her on a music trip to Norway. When can I go mum, when? She's the best teacher I have ever had in anything!!!

Well that was a success! When it came Léon's turn to have Agata too, he had been signed up by the end of the hour to her lessons, her classical orchestra, her folk group, for a starring role in her musical, to a trip to Norway and to her talented musicians programme. And he spent the whole trip home wondering if he should become a music teacher when he grows up!