English as a foreign language.

The kids have both English and German as 'foreign' languages here, as well as Danish as the native language, of course. Anna brought home her English text book yesterday. A little red-haired girl in tartan trousers standing on a sheep, Eilean Donan castle? I'm intrigued... So I opened it up... We are going to have fun with this!😂 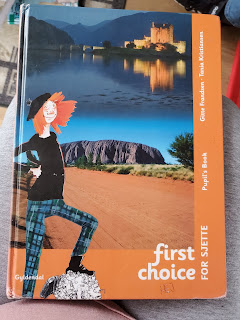 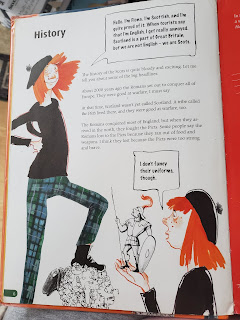 When I mentioned this on Facebook earlier, I was asked why this mattered... It struck me, as a Scottish person, as a really nice change to the usual way of learning English abroad.

As a Scottish person you get so fed up being called English all the time when you're abroad. That might have been difficult to understand in the past but surely now it is quite obvious that being equated with the insular Brexit mob when you were living (as I was till three weeks ago) in an area that voted 74%+ in favour of continued EU membership, it isn't hard to see you want to be seen as separate? As a student I was often asked things like which A levels I had - I was Scottish so hadn't any, I was no more likely to have an A level than a German Abitur!  I remember meeting friends in Konstanz when I studied there and coming home to letters addressed to Phyllis Buchanan, Glasgow, Scotland, England. Let's face it, even most English people don't know Scotland is different - as an example Charlotte is working as an au pair in Madrid at the moment. She met a uni student last week from Manchester (fully 2 hours from Scotland) who didn't know Scotland had a different education system, different exams, different uni entrance application process and longer degrees).

So to see that Scotland is going to be the focus of what Anna's class is learning makes a lovely change. And it is going to be fun to see how we are seen. Who knows - if their English is up to it, I can maybe even go in and give them a wee talk about the real 'Fionas' out there!

I can tell the 'fun facts' are going to be good! 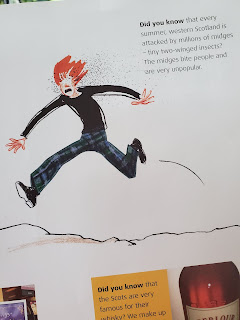