I've mentioned their liquorice fetish before, but I'm now surrounded by it.

On my first day back over here a couple of weeks ago, we arrived in the heat. We pulled into the first supermarket after we arrived - the Lidl in everyone's favourite (comic-value) town 'Middelfart'  (the kids have almost stopped chuckling about this now). We bought some caramel ice lollies to cool down and while we were looking in the freezers, I spied these: 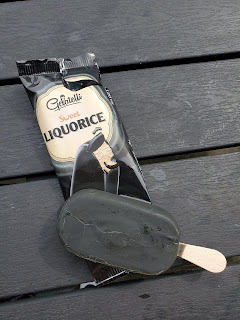 My first reaction was to recoil in horror, but I noticed they were described as 'sweet' so figured they were probably not all that bad - I can just about stomach liquorice allsorts at home after all. For some reason (probably the pic which depicted something cream coloured in a black casing), I had it in my head that it was probably a vanilla ice cream like you find in a magnum with a mildly sweet liquorice covering...

I decided today that I should try to fit in in my new surroundings. I think the only two things I vaguely dislike eating are horseradish sauce and wasabi, so I'm not someone who could be described as a fussy eater. I bit into it. The casing was strong and definitely not sweet liquorice. The inner ice was indeed cream coloured but was more zebra like. Salt liquorice fissures ran the full length of its innards. I tried a second bite. The warm bile-like taste was truly horrendous. Not one to give up, I tried a third bite. With each bite the taste was becoming significantly less palatable. I threw in the towel and rushed inside for something, anything, to take away the taste. I tried a fresh, juicy cherry tomato but the salt was still burning my throat. Thomas had made fresh seeded rolls for breakfast so I pulled off a chunk to see if, like with a strong chilli, bread would help - nope! I found a lump of fancy yellow watermelon in the fridge - still no luck. Finally, I opted for a black olive, a pickled chilli and a large lump of Pié d'Angloys all washed down with a strong coffee. I have almost managed to shake off the flavour though I expect it might be a recurring theme in all future nightmares. 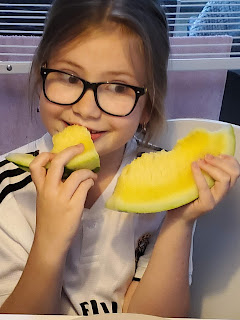 It was truly the most offensive thing I have ever tasted, worse even than salt liquorice sweets. I'm not sure I'm going to fit in in Scandinavia. Have I actually managed to find the only thing that is harder to stomach than Brexit?! 😂