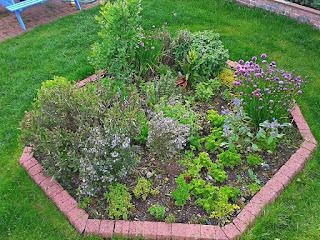 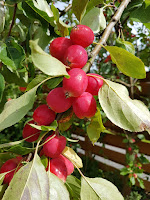 In Scotland we had built up an amazing garden over the 12 years we were in that house. By that I don't mean amazing by the usual Newton Mearns standards... It wasn't the perfect and pristine garden of a show house with all the flowers in matching shades in neatly weeded beds... It was mad and wild and messy but almost everything in it was edible and there was way too much for one family to use.

We had four different types of rhubarb and we only ever got through a quarter of it. We had strawberries all of June and early July, we had a whole late summer and autumn of raspberries, tay berries, brambles, white currants, red currants, black currants and wild strawberries. We had red love apples (last year we tried working our way through the table full of crates but didn't get close to finishing). There were two pear trees. We had so many crab apples I could have made jelly for all the local supermarkets, but contented myself with half a dozen jars and left the rest to the birds. We had one greengage, one cherry and one plum too. Like the strawberries, the kids did get through most of the blueberries we grew, though. More exotically we had two quince trees and, if you were feeling even more adventurous, a medlar!

In the herb patch we had chives, rosemary, two types of oregano, two types of thyme, three types of sage, three types of mint (segregated for the sake of the other plants!), lovage, angelica, bay leaves and a cardoon! In the greenhouse I was knee-deep in grapes and figs but by early autumn the wasps had beaten me to them, as I was again overloaded with too many fruits.

And those were just the plants that popped up every year with no help from us. 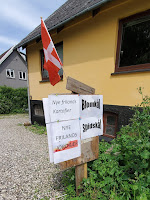 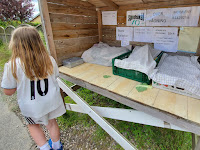 Round the side Thomas grew beans, peas, celery, onions, garlic, kale, lettuce and various squashes.
Interspersed with all the fruit were flowers. It was messy and wild like everything else in our lives, but it was functional, fun and yummy. The only problem was I had way more than my family and close neighbours could eat. Waitrose was selling three sticks of rhubarb for £2 and I had a spare 400 sticks rotting in my garden and no amount of jam making could keep up with it.

Now I have been in Denmark for a couple of weeks, I've started noticing these little constructions at the bottom every fourth or fifth driveway in the town where Anna and Amaia have started school. These are barrows, a stall or even a wooden box on its side, usually with cute little Danish flags on the top. Inside are trays full of fresh strawberries, potatoes, cabbages or similar with prices hand-written on them. There is also a wee sealed money box and also a 'mobile pay' phone number. People are selling off all the surplus from their gardens! Not content with food, some even put out bunches of flowers, saplings, homemade jam or honey and similar. 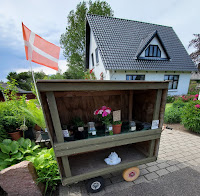 Some have even taken it to a whole new level putting out their artwork or ceramics too. Here's one in the next village who paints stone chickens and hangs them on her fence for sale! 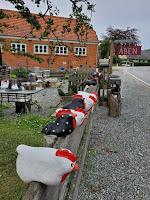 I could have made an absolute fortune in Scotland if I had been free to do something like this. It is just wonderful to think that any surplus I have in the future won't be left rotting on the trees and bushes. I'm definitely away to knock myself up a wee stall - I might even stick a Saltire on it alongside my wee Danish flag 😀