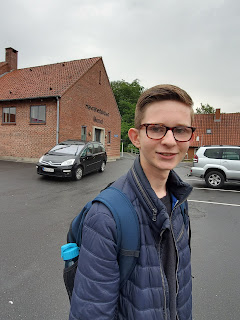 Léon was always going to approach this in a cocky and positive manner. To be honest, I've been quite apprehensive that he might crash and burn at the end of the first day. Léon's spoken Danish is best of all the kids - he's been hearing it longest, he's had his phone and computer in Danish for some time, two years ago he spent a summer alone with the Danish grandparents so spoke Danish all the time and generally he has a confidence and an extrovert personality the others don't. Anna or Amaia are perhaps a bit better at reading or writing Danish as they're more diligent and less slapdash, but Léon can wing most things and languages are his thing. He's part of a WhatsApp group with the kids from his grandparents' Italian village and never having learnt that doesn't stop him thinking he's practically an Italian native speaker.

When he was given his starting date and timetable I noticed his first period in Danish school was going to be double Danish - gulp. I became more scared he'd find it a bit daunting and lose confidence... silly me😜

When I picked him up, I asked how his first class with 'Claus' had gone. I had no real idea of what they do in Danish classes, so assumed it might be similar to his English lessons at home. His first task was to research food waste on the Internet, come up with the issues and debate them through a PowerPoint presentation. How daunting would that be in a language which is spelt as oddly as English? Even I was nervous to hear how that had gone.

A dual positive to Léon's personality is his ability to laugh at himself, while not being overly embarrassed by his own failings...

Danish is a bastard of a language when it comes to the correlation between spelling and pronunciation. It is also full of silent letters you just don't know are there if you learn it orally. Danish for 'food waste' is 'madspild', of course with a silent 'd'. Léon, not knowing about the 'd' guessed it was probably spelt 'madspil' as it was pronounced so gave a riveting Powerpoint to an amused group of 13 year olds on the topic of 'food games'. This change of meaning caused by a silent letter would have had Anna running for the door in embarrassment, but Léon thought it only added to his street cred. They all now think he's a great laugh!

That morning he'd been introduced as the Scottish kid who moved to Denmark 9 days earlier. As they were leaving school, one kid ran up to him in the playground and exclaimed in Danish 'Fuck, mate, if you learnt Danish that well in just 9 days, you're gonna be the cleverest kid in the school!' I asked if Léon fessed up to having been spoken to in Danish since he was born... of course not, he winked!