How our Danish schools do birthdays

Back at our Scottish school, I used to find birthdays a bit of a burden. I had five kids (granted I only ever had three at primary at the one time, so let's work on that premise...) Each of the kids had between 30 and 33 kids in their class so when Léon was in primary 7, the classes were made up of 33+33+30 kids minus my 3 own kids which gave me a calculation of 93 kids a year who could potentially have parties. In p1 and 2 the whole class was generally invited, by the later years we were probably down to one gender, so half the class. So I was averaging somewhere in the region of 45 parties a year. The standard outlay was between £10 and £20 per present. I tried to stay at the £10 end except for besties but could see that the average was closer to the other end. So attending other kids' parties cost a minimum of £450 a year, and was probably nearer to £600. With this outlay for others, ironically, I was left without enough to throw parties for my own kids as that would have set me back a minimum £200 a head too. They had at most two or three close friends home for dinner every other year and felt distinctly like second-class citizens. 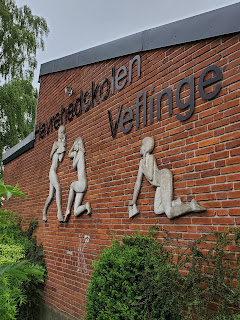 On Amaia's very first day at Veflinge primary an invite was ominously waiting on her desk addressed simply 'New girl'. We opened it to find she'd been invited bowling with the girls in her class for someone's birthday today - a fairly standard party we would have at home too. Here we go again... or not as the case may be!

Having joined the class Facebook group this week, we messaged the group admin to find out what kind of gift of what value was expected so as not to make our kids seem even odder than they must already seem. The format was then explained to us. Each child in the class is assigned another child in the class - the one whose birthday is closest to their own. A month before their birthday, you ask that child for a wish list and choose something to a value of max £22 to give that child from the class as a whole. That is the only gift the child receives from the class, while the kids still get the nice bowling trip, chips and ice cream and cake at school on the day. This system makes it affordable for all and means every kid gets a present from the class to the same value. I often found back home that the kids with the most invited the most kids and got even more while those with the least had to forego parties and presents of their own. And another positive is that when you come home you don't have 30+ gifts to have to fit into your kid's bedroom and an overwhelmed child in a meltdown!

Maybe this way I'll even be able to afford to throw my kids a class party at last!
Posted by Phyl at 6:53 pm