Since we had our tour of the two Danish schools last Thursday, we've had varying degrees of bravado and worry vis a vis going to school in a different language - some more predictable than others.

Monday was a bank holiday here - another of these weird religious days we work in Scotland, so Tuesday was chosen as D-day. As all three were starting at 8-10am, we tossed up for it (the schools are in neighbouring towns, 5km apart) and I definitely won - ie I got Léon, who thought it was going to be a breeze, rather than Anna who said she wasn't sure why she needed to attend Danish school at all and she would rather just pass on all friends going forward! Amaia was somewhere in the middle - surprisingly calm.

So here's the lowdown on the lower school... 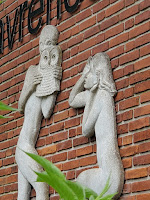 All seemed ok on drop off and the girls went in without impersonating a scared cat at the vets, so that wasn't dire. Personally, I was particularly amused by the mural at this lower school (age 6-12) - a 3D naked man seems to be distributing owls to naked women on their knees (not sure for what purpose) - very Scandinavian - I'm not sure you'd find that on an Anglo-Saxon primary school entrance wall - it's a shame they don't have a uniform here because if they did the blazer badge could be a picture of a naked bloke in an aviary! That might be quite fun to design. 😁

There are also smaller murals on the playground wall - these are on the p1 bit - I just love this! Someone's arse on a toilet 😂! 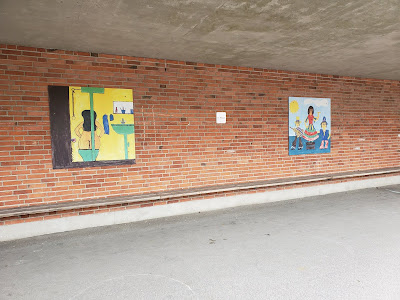 The primary here in Veflinge only has about 100 kids so they gather in the mornings to sing songs as a welcome. They started with 'I like the flowers, I like the daffodils...' all up on a whiteboard so they could sing along, so that was fun. Amaia's teacher also seems to do that welcome thing we've all seen on the internet, which is quite sweet.

No uniform - of course, and they dump their shoes at the entrance and run about in socks everywhere indoors.

Classes are all under 20 kids which is a nice ratio of teachers to kids.

The kids call the teachers (and the headmaster) by their first name - Amaia's teachers are Henriette and Morten, Anna's is Birgitte. Morten is apparently the Maths teacher and wears a superman T-shirt with an M on it and calls himself SuperMorten!

They don't have designated playgrounds other than for the infants so the kids can choose between the football field at the back, the basketball court or the large garden filled with climbing things. They are also allowed to wander off into the small forest behind the school if they want at interval and lunch.

There are home economics kitchens for the primary pupils and shower rooms for the little ones too.

They are much more laid back when it comes to consent - two kids in Amaia's class were turning nine yesterday and they were simply handed pieces of birthday cake without consent forms in triplicate and the Spanish inquisition - that is a breath of fresh air, after many years of filling out the same form over and over!

They have come up with a cute way of dealing with birthdays - each child is meant to bring in a gift for the child whose birthday comes next so Amaia has been assigned a girl who is turning ten ten days after her next January.

At the end of the day, different ages get out at different times - Amaia's day finishes at 1-50, but as they would like the kids to get some exercise, you aren't to pick them up till half an hour after the bell so they can go on the jungle gym and run around the basketball court with their friends! Anna gets to stay half an hour longer but as they'll all eventually be walking home or coming by bus if we move to the neighbouring town, then it's no big deal. 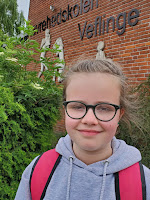 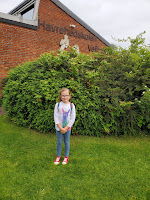 I'll do Léon separately so this doesn't get too long😀