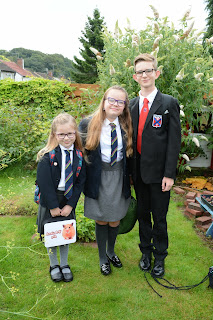 So this is how the 'little' three started the school session 2018-19. And on Tuesday, I'll update it to how they are finishing it. They are going to try out Danish school for three weeks just to see what it is like!

Yesterday we got word that the schools we had been hoping to get them into had a space for each of them, despite their not yet being in catchment. We went along for a meeting with the head teacher and a tour of the two schools.

The first thing that struck me and the kids, as Scottish people was that the head was dressed casually and introduced himself as 'Kim'. As we walked about in the school, the kids all seemed pretty similar to those in Kirkhill or Mearns Castle, though Léon's mouth fell open when two of the eight year olds in one of the classes rushed up to 'Kim' and gave him a great big hug. Léon turned to me and said he could never have imagined doing that to Mrs Donaldson back in his primary days! On entering what will be Amaia's class, a pretty young teacher introduced herself as Henrietta and asked Amaia her name. Interestingly, the class sizes are all under 20 kids too, so that'll be a help when the kids are trying to get up to scratch with their written Danish and may need to ask for extra help with the odd word 😊

Other differences we've noted so far were mini-shower rooms for kids as young as seven for after their PE lessons. I didn't see a shower at school till I turned 11! They also seem to have proper 30cm sharp knives in the home economics classrooms (like those we have given the kids to use since they were little). Back in Scotland Léon constantly complains about high school insisting the younger kids use implements bordering on butter knives, for 'health and safety' reasons!

Léon's ears pricked up when school trips to the likes of Berlin were mentioned. It'll be interesting to see how much they want for that as we've always considered the high school trips in Scotland beyond our means. The kids have only ever taken part in World Challenge trips which they have fund-raised themselves, but despite wonderful trips to France, Italy and the US being on offer every year, they always come in at about double what I would expect to pay... so watch this space.

Induction also seems to be done differently... Anna will be moving up to the middle school in the session beginning August 2020. Back home she was due to start Mearns Castle this summer and three induction days had been arranged for this week. Apparently at the new school she will go to the middle school every Thursday next year to get ready for the move. 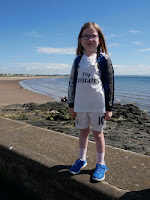 As we were leaving, a child passed wearing a Denmark football top. Because of the risk sectarian nonsense back home, football tops were a no no even on dress as you please days. Now every day is going to be dress as you please, Amaia chanced her arm and asked if she could wear her Real Madrid strip to school. The head didn't even understand why that could be an issue! Amaia is a very happy bunny.
Posted by Phyl at 9:25 pm