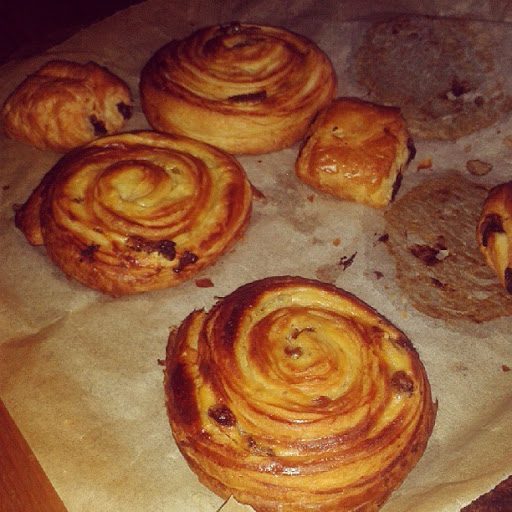 In the part of France I (used to) come from, these are not 'pains aux raisins', as they are everywhere else, they are 'Schneck' (not Schnecken, I hasten to add - that wouldn't be good Frallemand!)

So with that backdrop in mind, we had this cute conversation in the car yesterday. Marcel came in from school with a letter inviting all the advanced Higher French class pupils to a frogs' legs and snails lunch in Glasgow for Xmas. He remembered tasting frogs' legs in Paris when he was eight, but was unsure as to whether he'd ever had snails. Lots remembered the same from when she was six. Léon asked if he had tasted frogs' legs then too. As he was about six months old at the time, I was sure he hadn't and pointed that out. 'Oh but I've definitely had snails, though' he replied. That would surprise me but he did go to France a few times to see his grandmother after I split up with he who shall not be named, so maybe he was right. I asked what he'd had them with, expecting the answer 'garlic' so was gobsmacked when he came back with 'croissants and pains au chocolat!' I guess, despite not being much of a German speaker he understood the word 'Schneck' after all!

I might add when I explained I actually meant the slugs with shells, he was somewhat dubious as to their edible quality!
Posted by Phyl at 1:15 am