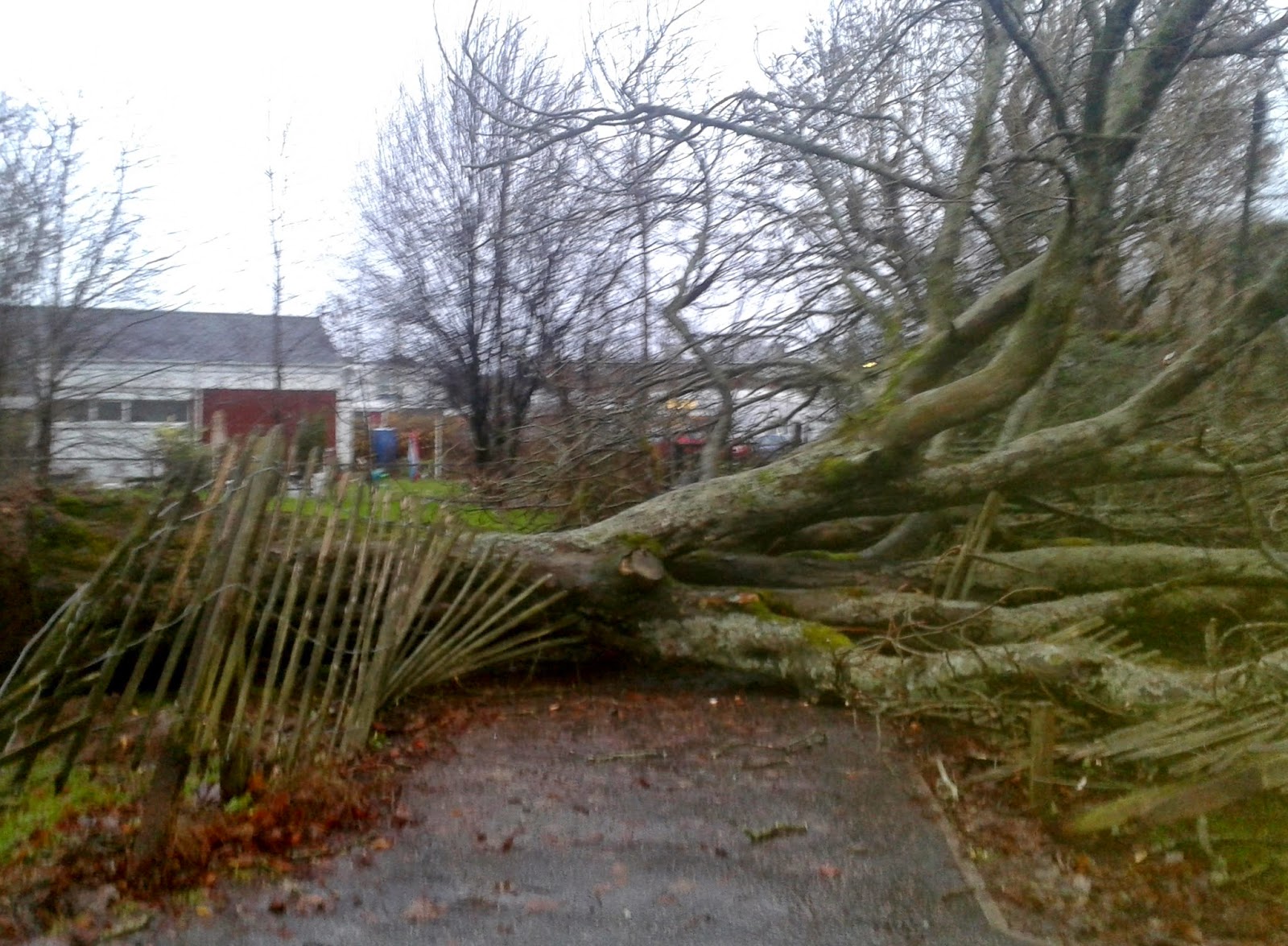 It's been a blustery night...
I could tell from the fact that the wind woke me up every hour that things weren't completely normal out there. I got the little ones up at 7-45 and told everyone that I'd take them to school this morning. Normally Marcel and Lots get the bus but I figured if they'd to walk the 15 minutes up to school from the bus stop they'd be soaked through for the whole day.

Marcel had done his paper round as usual. Today would have been a good morning to hand out his Xmas cards to his customers I think - no one would have dared not to give him a Xmas bonus as he was (despite being nearly 6 foot tall and carrying a bag with thirty odd newspapers in it) blown from the pavement out onto the road several times, not to mention he spent more than an hour dodging flying debris in the dark.
Marcel told us how bad things were so we checked two Twitter/Facebook feeds - East Renfrewshire Council's which informed us all schools were operating normally, and the local Police who were advising people to leave the roads free for essential travel only! Ho hum.

So we all set out at 8-25. The high school is seven minutes away and they need to be there at 8-45. The first obstacle was on Crookfur road. Where they have recently torn down the pensioners' houses an old tree had fallen over and was blocking three quarters of the road. 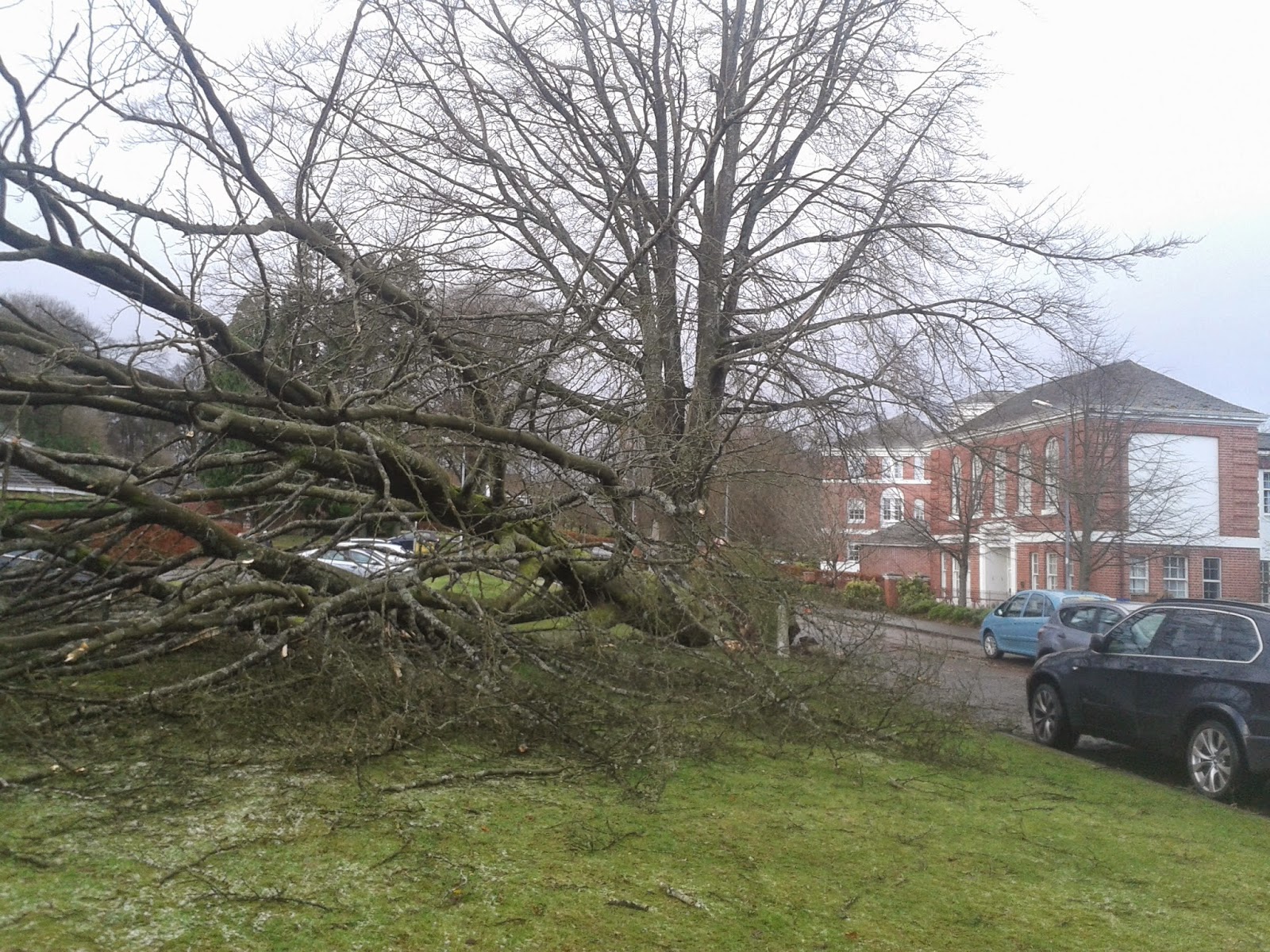 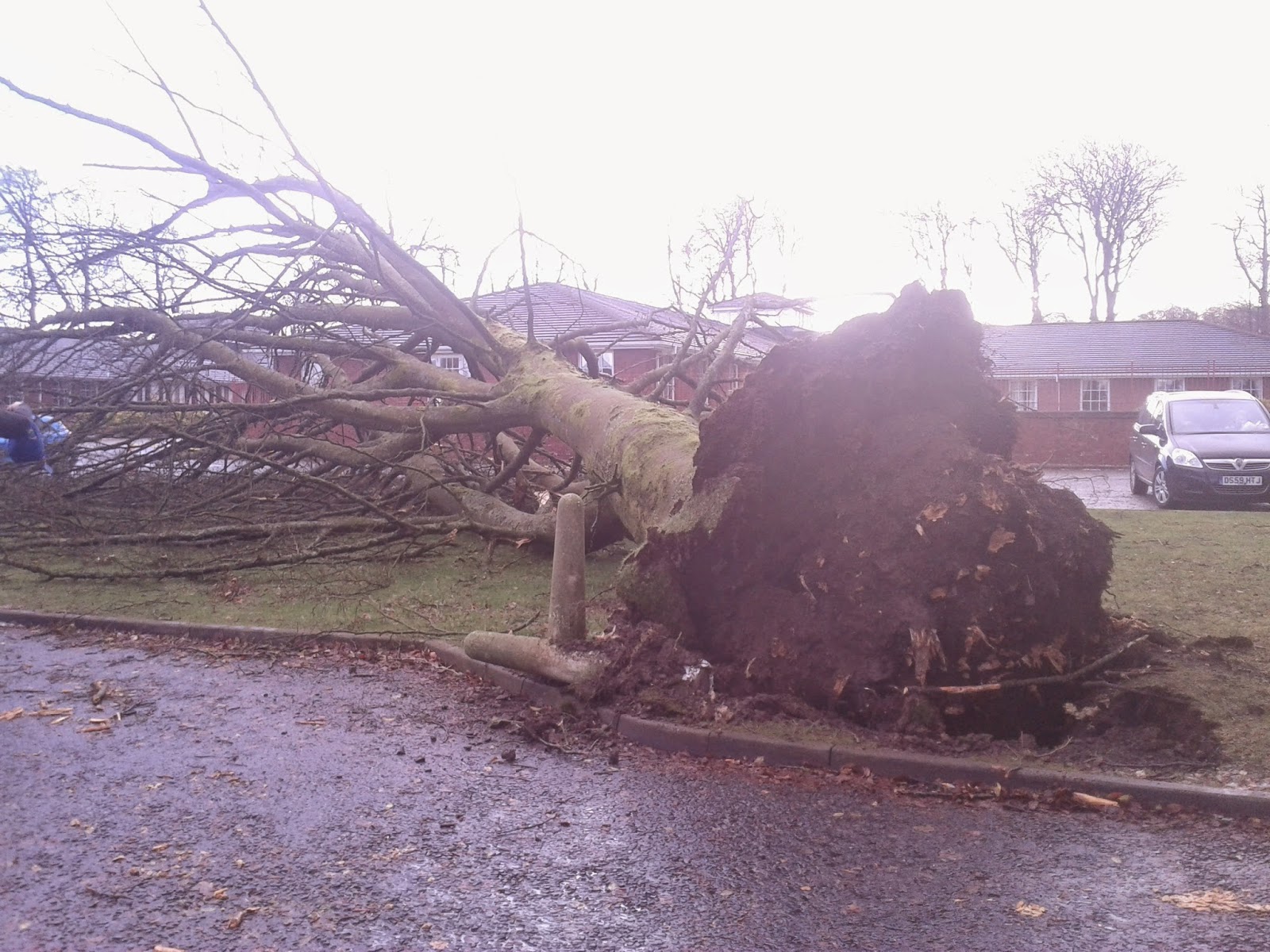 The large chunks were on the right of the road but the left was blocked by the top of the tree so cars took turns driving up on the pavement to pass it by. This added ten minutes onto our journey. Things were calm from there on until we reached Waterfoot road where the high school is situated on top on an exposed hill. Our car - a seven seater people carrier with six people inside was lifted noticeably off the the ground and shaken from side to side. Lamp posts swayed and I could see the old tree in the farm had been blown over and destroyed but fortunately it was lying on the field rather than the road (I'll take a photo later).
At this point we got to drop off and Charlotte had no problems getting out (the C8 has sliding doors in the back) but Marcel actually couldn't open the front door and when he did it blew back and hit his head.

From there we drove to the primary and things seemed calmer as we left the exposed hill. But the photo above is the infant school entrance! I heard parents discussing that this had 'just happened' but I wasn't there so don't know if anyone was trying to walk down the path when it blew over. People do like a drama.


From there I went to nursery where two trees were damaged in the garden adjacent to the nursery building. 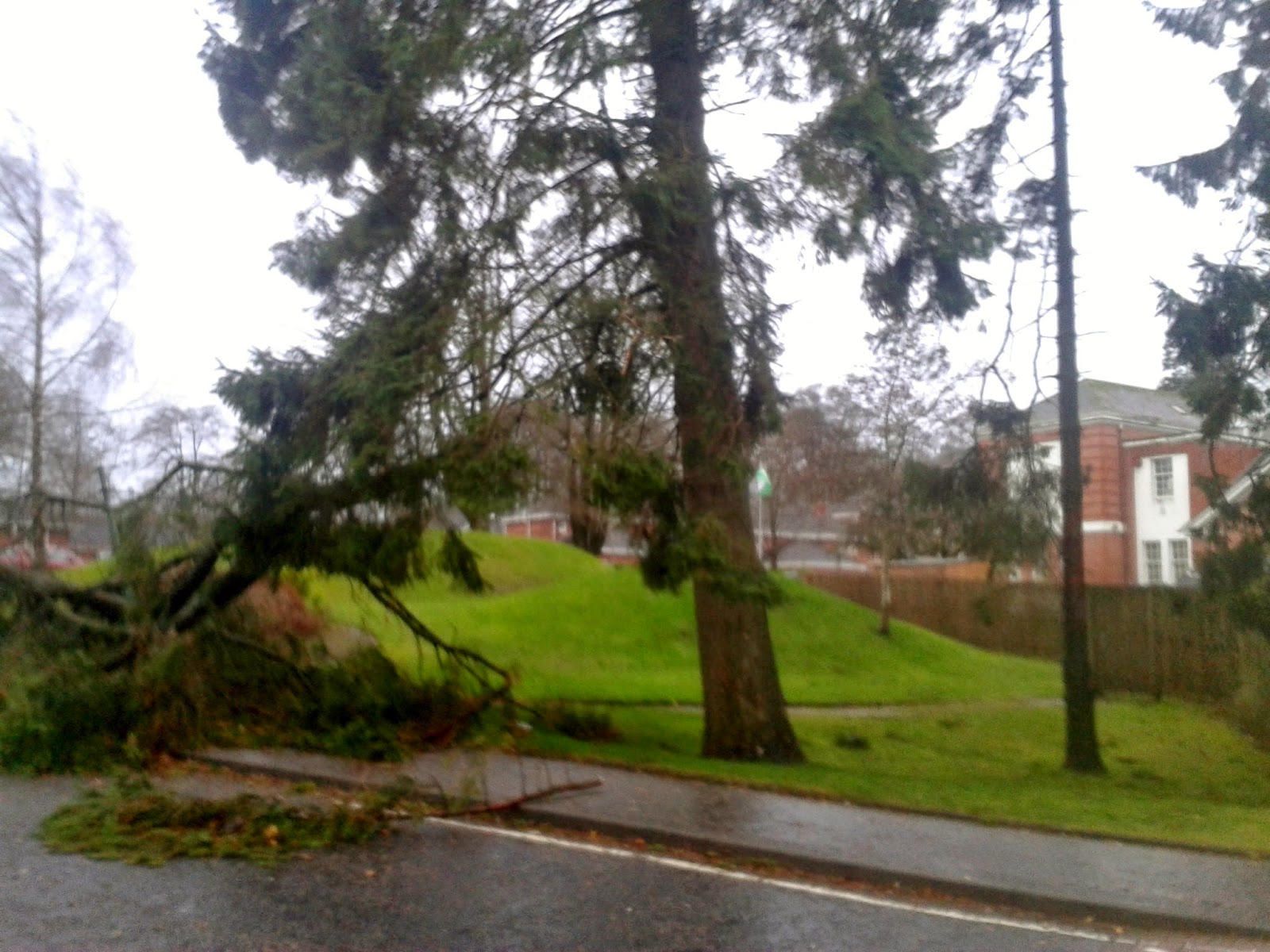 Now, anyone who knows me knows I am not a health and safety parent. The primary ban on kids sitting on the school wall or running about on the grassy embankment drives me mad. I fully believe they should be out throwing snowballs in the snow and not stuck bored in classrooms looking out at it. I let them climb trees, cook, use sharp knives etc but I do believe the council made the wrong call this morning. Things are calmer now and kids could easily have been told to stay home until the worst of the storm was over and then come in. But I drop my kids every morning a street from school and let them walk in alone. I give them that independence to help them grow and I do not expect them to be crushed to death by a tree on the way in. If this happened, it was clearly not safe this morning.
Posted by Phyl at 11:44 am