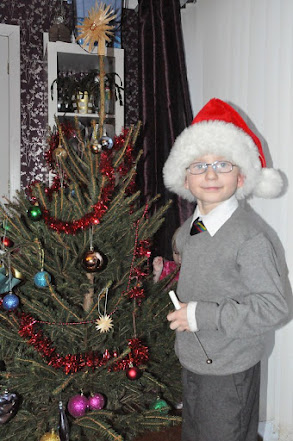 Léon knows there's no Santa. We have always done 'European Xmas' in this house - presents on the night of the 24th from relatives so Santa doesn't come during the night.

Now he's in primary 4, a good number of the kids are now also in the know. To be honest, thinking back to when the other two were that small, I am very surprised anyone still believes at that age, but there you go...

So today we were driving to school when Léon got into a tizzy. I asked what was worrying him and he said that it had just occurred to him that some parents might never actually get round to telling their kids about the Santa myth and what would happen to their kids in turn if they didn't realize there was no Santa, because that would result in no one bringing them any presents!

I did try to explain there's usually quite a gap between believing in Santa and becoming a parent - well in this particular suburb of Glasgow anyway!
Posted by Phyl at 11:35 pm