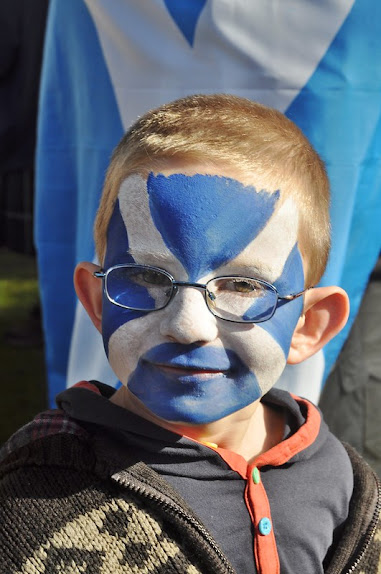 We were at the Scottish Independence rally in Edinburgh on Saturday with the three wee ones (the biggies having already booked sleepovers with friends weeks earlier).


The weather was superb and the atmosphere great fun and full of family entertainment. Léon and Anna loved all the flags and having their faces painted and the march from the meadows to Princes street went down well too. 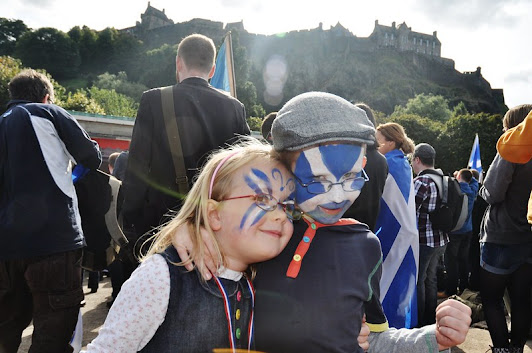 I had thought the kids would zone out once we got to the political speeches but surprisingly Léon sat down happily to listen. First up was Alex of course followed quickly by Margo MacDonald. Margo pointed out part way through her speech that with support for independence already in the mid 30% bracket, each person who'd already decided to vote yes only needed to convince a single other voter for us to be home and dry.

Léon looked quite excited throughout her speech and I wondered what had caught his interest. When she left the stage and the applause died down, Léon turned happily to Thomas, who he knows has been campaigning for an autonomous Scotland just like his home country of Denmark for over a year and announced:

I can't believe it, we've won!
How so? I enquired!
Well that lady just said that we only need to convince one more person to win and since we've left Marcel and Charlotte both at home, we can just go home and tell them and that's two! We've won by a landslide! he said, almost dancing with excitement!

Hmmm - I guess he missed the little word 'each' in Margo's speech but still, it wasn't bad concentration on the rather complex political content for a six year old!
Posted by Phyl at 11:35 pm