Health and Safety rules for public swimming pools seem to have changed in the last few years and the new rules (or at least those they are enforcing in this council area) are a bit OTT if you ask me.

Thomas and I were down at Eastwood leisure centre this morning with four of my five kids. Apparently they have adult to kid ratios and I noticed while I was in the pool that they are strictly enforced. In the big pool every under-8 needs an over-16 in charge of them and in the baby pool the ratio is one over-16 to 2 under-8s. The fact that they choose 'under-8' as the benchmark rather than 'non-swimmer' strikes me as mad. When my older two were under-8 the rule was no non-swimmers out of their depth. This seems infinitely safer and less constrictive to me. My oldest two learnt to swim at four and Marcel could definitely easily have out-swum say my mother at 6 but under the new rules my mum would have been forced to be in charge of him even though he could dive at the deep end and mum wouldn't go out of her depth. He'd not have been allowed to swim without an adult at his side for four whole years, despite being happy to do many lengths of the pool safely. Charlotte too (seen above in a two metre pool at four) would have had the same annoying constraints put on her.

Worse still pools without baby pools have a strict one to one ratio in ER - eg East High School public pool or Neilston would actually not let Thomas and I go swimming at all for pleasure with our three youngest kids as they are all under eight - despite the fact that Léon can swim unaided. Where's the sense in banning kids from learning to swim or practising because they have siblings? Swimming should be a fun pastime for families, not something you need to delegate to a paid teacher simply because you have three kids. And it's like driving - you start to learn once you can do it, and these rules ban you from practising in the safe environment of your family until you are eight!

Today Léon wanted to be swimming lengths of the big pool, which was more or less empty - (with three guards up on ladders watching) but I was forced to swim up and down at his side. This meant Thomas could not leave the baby pool to teach Anna to swim because that would have meant - shock horror leaving Lots - a child just short of 13 with 9 years swimming experience in charge of sitting beside Amaia in a pool that was less the 50cm deep! (Also with two guys supervising up ladders).

Life guards used to be employed to watch if people got into difficulty and save them. Now they seem to be there to run up and down their ladder every five minutes to tell some poor parent that they have dared to allow their child to walk poolside without holding on to them and threaten them that they are breaking the 'legal requirements'. Give me strength!

The ironic thing is that Léon is not allowed to even walk unsupervised between the two baby pools though he is already capable of jumping in at the deep end of the adult pool and swimming safely to the shallow end but Anna who we can't teach to swim at the moment because of their one to one rule will be allowed in four years time in the big pool alone even if she still can't swim - where's the logic in that?

Oh I see where the logic is - the logic is that the council run overpriced, fairly ineffective swimming lessons that aim to teach your kid to swim just about competently just before they turn eight. You can sign them up for weekly lessons costing about £4 per half hour eleven months of the year from three but given the local pool rules won't let them in alone till eight, there is no major incentive to have them swimming competently for the first few years - quite a money-spinner.

But even if I have to take them all down on separate days I refuse to work at their pace.

And finally - does this look like a guy who needs an adult holding his hand every inch of the way to you? He's jumping into a two metre deep chunk of the Arno, with only a fourteen year old looking on! 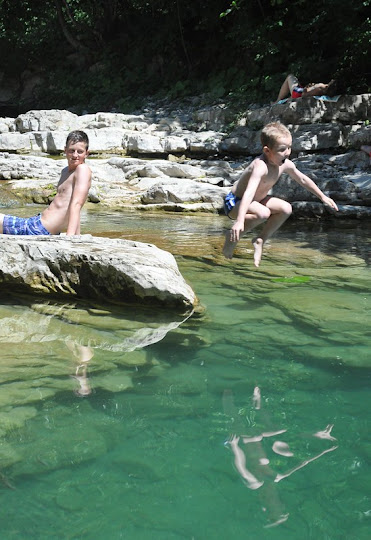