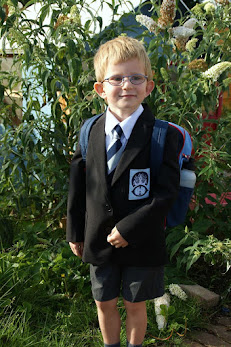 When Marcel started primary school back in 2002 the uniform at his school was a white polo shirt with a school logo, a blue sweat shirt with the same logo, non-branded grey trousers and black shoes.

When I was a child standard uniforms for little boys like Marcel consisted of a plain shirt, a school tie, trousers and shoes, as Léon is pictured wearing above. This was the original 1960s uniform and was still an option when Marcel started but was worn mainly for school photographs and perhaps on a child's first day when the parents wanted them to look extra-smart. When Marcel started in a year with 90 children, no more than five or six wore the 'smarter', old-fashioned uniform on a daily basis. I was greatly relieved as I am not in favour of four year olds having to waste time of fiddly little buttons and ties. I don't think they look smarter (after their first toilet visit of the day) as their shirt tails are generally flapping in the wind and after PE ties are backwards and the likes - little boys tend to look a state in the old uniforms! I have taught in France and been married to a highly intelligent Frenchman and Dane who both managed to get a first class education despite sitting in class in jeans and a jumper!

When Léon started at the same school last year, I ordered the usual uniform out of habit. He started to moan constantly about wanting to wear the old uniform. I figured it was a phase he'd grow out of, but he didn't and by p2, I relented, allowing him to wear the old-fashioned uniform on non-PE days. I hadn't asked myself why Léon had taken such a fancy to the uniform until recently. Standing at the school gate I started to notice the percentage of kids wearing the old-fashioned uniform had increased noticeably. Back in 2002, 6 or 7% of kids wore it, today I noticed it was closer to 25%-30%. Maybe Léon was simply seeing more kids in it and that was what was inspiring him?

I started to ask myself why it was coming back into fashion? It is not more practical, it is not more durable, and with the youngsters in charge, it is not smarter... I could think of one main issue. It is much cheaper. A pack of five shirts is £4 in Tesco, five plain grey (unbranded) jumpers cost £15, and a tie (which can be used for the whole seven years is £4.99). So a whole week's outfits cost just £19, with a one-off outlay for the tie. The branded polo shirts cost around £7 each and the sweat shirts are about £10 each. So if you wanted a polo shirt and sweat shirt for each day, a week's uniforms cost £85 plus trousers and shoes.

East Renfewshire contains some of Glasgow's most affluent suburbs. People pay inflated housing prices because the schools are unrivalled in the state sector. Most residents are typically professional or senior and middle management. The current recession is not following previous patterns where low-level workers are made redundant and find a new job or live on benefits. This is a recession where middle and senior management are being thrown out with no possibility of benefits to cover their hefty mortgages, and because their houses have not increased in value in four years, and self-certification is no longer accepted, they are unable to sell up and move unless they can find cheap, rented accommodation, which of course doesn't exist in East Ren. Public sector workers are also now beginning to be hit with pay freezes but rising inflation. I am beginning to suspect that what on the surface looks like people returning to the smarter, old-fashioned look for their kids is, underlyingly, actually something much more sinister.
Posted by Phyl at 11:52 pm