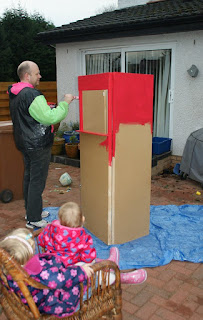 Thomas has always been very political, blogging constantly about both UK and Danish politics but when I found he'd installed a home-made voting booth at the entrance to our bedroom this morning, I had to wonder what he was planning!

It turns out, in fact, to be a puppet theatre that he's been working on so he can throw puppet shows in Danish for the three youngest kids - he has a box of puppets upstairs - how sweet! Though rumour has it he expects me to paint it before use.

It is a shame really - I had this thought that if I installed it in my garden during the next general election, I could  put up posters directing locals here to vote and have some fun with it! It could be quite a good way to influence the outcome of the local poll but it'll probably be less convincing in red or blue!
Posted by Phyl at 11:35 pm