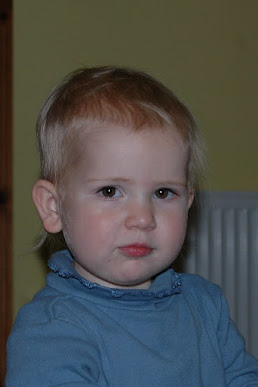 I know many people dream of rich and powerful futures for their offspring, but I am beginning to suspect Amaia may simply grow up to be a shoplifter or drug smuggler! :-(

She has a habit of taking things and hiding them in her vest. She pops them in at the neck and we find them at various places throughout the day.

Take this last week. First, ten or so of Léon's lego men, complete with guns, spears, helmets and Viking horns all went missing. No one had seen them until I noticed Amaia had a limp the morning after they went missing. She was wearing her fleecy all-in-one pyjamas. The men were found in her left leg, after she'd managed to sleep a whole night with them.

The following day I pulled off her pinafore at bath time and her cutlery from dinner fell out of that!

Today I was about to change her nappy when I found sound strange dented patterns on her pelvis - I opened the nappy to find it full of paperclips, which once again had been inserted at her neck and fallen down through her vest into the nappy.

Finally, on another nappy change, I opened the poppers to reveal her stomach had various coloured stripes on it... and as I searched further up inside the vest, I of course found various crayons and felt tip pens minus lids.

Given we have so many relatives abroad, I really need to take great care before boarding a flight, especially with some of the more budget-end airlines... Trying to explain that I was not in fact trying to smuggle a knife, a cork screw or various unidentified powders, gels or substances in my baby's nappy might not just wash with them! :-\
Posted by Phyl at 11:31 pm