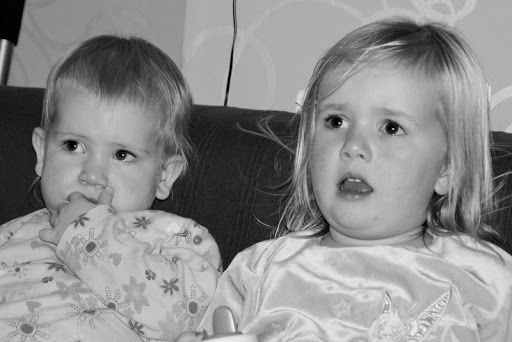 Looking at your child and seeing yourself is such a special feeling. You see your expression in eyes of another colour, your smile on a man who was your little boy just a few years earlier, you hear your laugh in a baby - it makes you realize what everything is all about.

Listening to the little ones parent the littler ones is always amusing. I overhear Anna chastising Amaia (or even Léon) in words she could have only stolen from me and I laugh. She accuses me of procrastinating and I know she's heard Thomas and I chatting!

One of the most amusing things when you have as large an age spread as me is hearing the younger ones use their knowledge of what they hear from the older ones when interpreting what is going on around them. Léon occasionally refers to girls as 'fit' when he means 'pretty' for example! Marcel! And tonight Anna was standing on a chair above me singing what she thought were the correct words to the nursery rhyme: "I'm the king of the castle, and you're a dirty wee 'arsehole'!" I'm not sure that happens when three year olds don't have teenage siblings!

It is particularly fascinating to analyse the character traits your children inherit. Thomas hates embarrassing situations. Movies of the Borat type leave him squirming to the point he cannot physically sit on the couch and he dashes for the kitchen at the first opportunity on the pretext of coffee-making or the likes. Anna has inherited this character trait and I suspect from Amaia's concerned look in the above photo she probably has too. It was taken as they were watching the Swedish (dubbed into Danish) film Emil i Lönneberga. It shows a boy of about eight getting into all sorts of scrapes and up to all sorts of nonsense - he upsets his father by filling his wellies with water to check if they are water-tight and drops some black pudding mixture on his head for example. Instead of laughing, as intended, at the slapstick comedy of the situation, as Léon does, Anna squirms nervously on the couch saying he makes her feel ill at ease, while Amaia chews her fist worriedly, neither girl even smiling at the fun goings-on. Thomas came in last night and looked similarly uncomfortable. It is very sweet to watch!
Posted by Phyl at 10:55 pm

A can assure you that the vocabulary of a three year old in kindergarten is much like in a teenager!

And nothing has changed since I went to kindergarten 30 years ago - Ellen came home the very first day and called me "prutskid" (untranslatable). :)

But I must confess that I was a bit shaken, when I heard an eight year old call another boy for "din fucking cocksucker" in the after-school-place I worked in about 15 years ago! I mean, he clearly had NO idea what it meant. But I guess an eight year old today would know it...