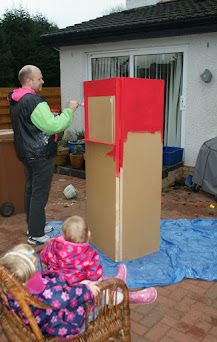 Bilingual kids have to memorize from as young as possible who speaks which language. Amaia, for example (at 22 months) is still at the stage where she comes out with completely mixed sentences and happily uses the wrong words to, say my parents or Thomas's. Anna (who is a month short of 4) already knows how to interpret for non-Danish/non-English speakers so would explain conversations between her Danish-speaking cousin Ursula and my parents.

Funnily enough learning who speaks what doesn't stop at people! Bilingual kids may have a teddy or similar who only speaks one of their languages!

This fantasy continues to quite an advanced age in childhood. I remember Thomas telling me his dad had a box of puppets when he was a child who could only speak German (Thomas is bilingual German/Danish from birth - his dad was originally from Germany). Thomas was happy for these puppets to only speak German but one day he had some kids home from school, so his dad was obliged to make his German puppets speak Danish so the other kids, who were not bilingual, could understand the show. Thomas told me he was beside himself - completely distraught, as the illusion had been broken. He had known for years that the puppets were German-speaking so speaking Danish was really wrong in his young mind.

Yesterday we dropped in on my parents and my mum asked Anna if she had any wishes for her 4th birthday next month. After a day's thought she asked me tentatively this evening: Do you think if we went out shopping we might be able to find any puppets who can speak English, mum?!
Posted by Phyl at 12:19 am