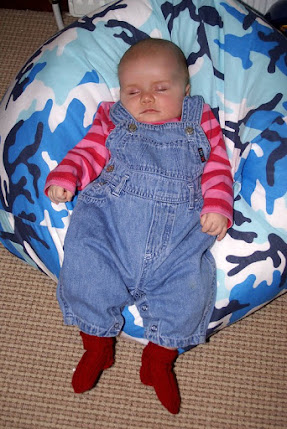 I remember being in B&Q many moons ago with my beloved ex-husband. We were walking past an assistant when he accosted her with the query 'Where can I find beanbags?' She thought a moment, then replied - 'We don't stock beanbags' Now, my ex was not exactly known for patience so he immediately jumped down her throat pointing out he'd often bought beanbags in B&Q. I am not sure if he'd just been annoying me that day or if I was an evil or twisted mood, but I didn't rescue him... You see, after many years together, I immediately realized he was asking about 'binbags', he simply had (and still has) a very French accent. Vaguely amused, I continued to look on as he became more and more exasperated with the poor girl who by then was adamant that B&Q didn't have any beanbags! He just didn't seem to be picking up on her repetition of his pronunciation. Childish, I know but everyone is allowed the odd amusement!

Years have now passed (this episode probably dates from 2002ish). None of my kids, though they speak French, has even a hint of a French accent, having been brought up and schooled here... or so I thought till this week. I was driving in Newton Mearns on Monday morning when all the wheelie bins and recycling bags were out on the kerbside for collection. Léon was riding up front with me when a paper recycling bag blew out onto the road in front of my car. 'Watch out for that beanbag!' he shouted very clearly. I was stunned. 'Binbag' I corrected, and he looked puzzled before correcting his pronunciation. How odd!

Still surprised at that, Charlotte (who had not been in the car when this event occurred) blew me away this evening. I have been negotiating with my ex for a pair of bedroom curtains on and off for five years. Given we don't speak, this hasn't been the easiest task but this week he finally relented and allowed me to have my ladybird curtains back for Anna and Amaia. Charlotte bounced in from the dining room at about 5pm and asked 'Did you see Papa dropped off those green curtains this morning?' 'No - where?' I asked, given I hadn't seen them. Her reply... 'They're in that beanbag on the table!'

What is that man doing to my kids suddenly?!
Posted by Phyl at 12:16 am