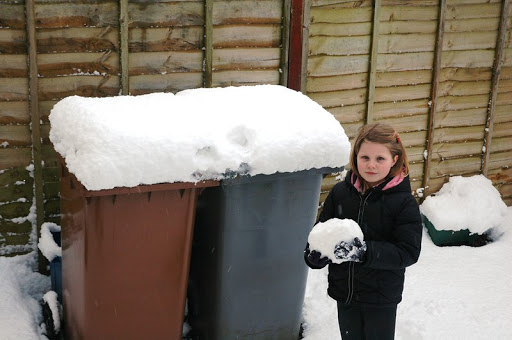 East Renfrewshire council has changed all its refuse policies recently to save money on landfill bills. Their new idea of collecting rubbish fortnightly instead of weekly of course means those who didn't recycle before are now forced to. Given there are seven of us, our refuse has never fitted in the bin without recycling absolutely everything down to the smallest yogurt pot and we've needed to use a garden composter for years so it isn't really affecting us very much. The problem we are having is their new food waste policy. We've always put the vegetable waste in the garden dalek so the brown bin has only ever been used for weeds. The council has decided to incinerate all food waste now - chicken carcasses, spaghetti, beans and the likes. We're meant to put it in the brown bin so that's what we've been doing. The weather of course has been sub-zero since the end of November. So every day we chuck out food waste and it freezes solid to the bottom of our brown bin. Every Friday the bin lorry turns up, two men jump out and hook on our brown bin, turn it upside down, the frozen food stays firmly stuck to the inside of the bin, they return our bin and drive off. Isn't that an impressive use of council funds? A troop of men driving round all day tipping up brown bins completely aimlessly. I wonder why no one at the end depot is asking why the truck is returning empty after every seven hour shift? It'll be interesting as the season goes on. I reckon our brown bin waste will reach the brim round about spring by which time the rotting food will really start to stink as it thaws! I can hardly wait :-/
Posted by Phyl at 11:29 am